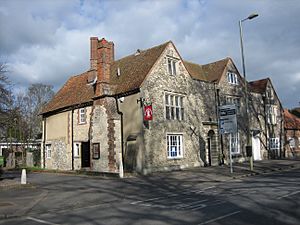 Wallingford Museum is a museum with collections of local interest, housed in a Tudor house in High Street, Wallingford, Oxfordshire (formerly Berkshire).

The museum has an extensive collection relating to the town's history. Displays include archaeology, Wallingford Castle, and the town in mediaeval and Victorian times. A free audio tour is available.

The museum is in a mid-16th-century timber-framed house with a 17th-century flint façade. It faces the Kinecroft, an open space in Wallingford which is bordered on two sides by Anglo-Saxon burh defences built in the 9th century.

The Museum, which is fully accredited, is run entirely by volunteers. Wallingford Museum is an independent charitable company registered in England & Wales.

All content from Kiddle encyclopedia articles (including the article images and facts) can be freely used under Attribution-ShareAlike license, unless stated otherwise. Cite this article:
Wallingford Museum Facts for Kids. Kiddle Encyclopedia.