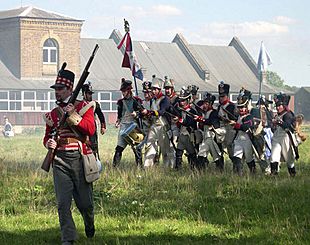 The Royal Gunpowder Mills, Waltham Abbey, were in operation for over 300 years. Starting in the mid-1850s the site became involved in the development of revolutionary nitro-based explosives and propellants known as "smokeless powder". The site grew in size, and black powder became less important.

The Mills are an Anchor Point of the European Route of Industrial Heritage, set in 175 acres (0.71 km2) of parkland and containing 21 buildings of major historical importance.

Pre-gunpowder use of the site

The story of gunpowder production at Waltham Abbey begins with a fulling mill for cloth production; originally set up by the monks of the Abbey on the Millhead Stream, an engineered water course tapping the waters of the River Lea. Mills were adaptable and in the early 17th century it was converted to an 'Oyle Mill', i.e. for producing vegetable oils. In the Second Dutch War gunpowder supply shortages were encountered and the oil mill was converted to gunpowder production, possibly in response to this. In 1665 it was acquired by Ralph Hudson using saltpetre made in Bedfordshire and Hertfordshire.

The Hudson family sold out to William Walton at the end of the 17th century, starting a family connection lasting almost a hundred years. The enterprise was successful under the Walton's tenure, especially thanks to the efforts of William's widow, Philippa Walton, and the Mills expanded up the Millhead Stream as additional production facilities were added; the material progressing from one building to another as it passed through the various processes. The Waltham Abbey Mills were one of the first examples in the 18th century of an industrialised factory system, not often recognised. In 1735 they were described by Thomas Fuller, a local historian, as "the largest and compleatest works in Great Britain."

Purchase of the site by the Crown

In the 1780s there was fresh concern over security, quality and economy of supply. The deputy comptroller of the Royal Laboratory at Woolwich, Major, later Lieutenant General, Sir William Congreve advocated that the Waltham Abbey Mills should be purchased by the Crown to ensure secure supplies and to establish what would now be called a centre of excellence for development of manufacturing processes and to establish quality and cost standards by which private contractors could be judged. In October 1787 the Crown purchased the mills from John Walton for £10,000, starting a 204-year ownership. Congreve was a man of immense drive and vision, a pioneer of careful management, quality control and the application of the scientific method. Under his regime manufacture moved from what had been a black art to, in the context of its day, an advanced technology. The distinguished engineer John Rennie coined the phrase ‘The Old Establishment’ in his 1806 report on the Royal Gun Powder Factory. The term refers to the gunpowder mills when they were still privately owned, before they were acquired by The Crown in 1787.

Reflecting this, the mills were able to respond successfully in volume and quality to the massive increases in demand which arose over the period of the French Revolution and Napoleonic Wars from 1789, culminating in the victory at Waterloo in 1815. In the years following Waterloo the Mills entered a period of quiet with a steep decline in staff numbers and production levels. However, there was a steady advance in machinery and process development.

The quiet was not to last. Conflict broke out in 1854 with the Crimean War with Russia, followed by the Indian Mutiny and a succession of colonial conflicts followed, culminating in the Boer War of 1899 - 1902.

All of this provided the impulse for further development. Whilst the mills' function was to provide gunpowder for military use, either as a propellant for use in guns, or as a military explosive for demolition, etc., improvements effected there were a strong influence on private industry producing for civil activity - construction, mining, quarrying, tunneling, railway building etc. which created a massive demand for gunpowder in the 19th century.

World War I from 1914 to 1918 brought a huge upsurge in demand. The East Flank, including a long range of Cordite incorporating mills, designed by Harry Bell Measures, was built at this time. Staff numbers increased by around 3,000 to a total of 6,230. The 3,000 additional workers were largely female, recruited from the surrounding area, and this was a significant social phenomenon.

After World War I there was another period of quiet before anxieties about the future surfaced again. It was decided that production at Waltham Abbey would be gradually transferred to the west of the country, more distant and thus safer from air attack from Europe. However, in the meantime, production continued and crucial development work was carried out on TNT production and on the new explosive RDX.

During World War II, Waltham Abbey remained an important cordite production unit and for the first two years of the war was the sole producer of RDX. RDX is one component of torpex, the explosive that was used in the Bouncing Bomb.

Total transfer of RDX production to the west of England, to ROF Bridgwater; and dispersal of cordite production to new propellant factories located: in the west of Scotland, three co-located factories at ROF Bishopton, to Wales, ROF Wrexham, and to the North East, ROF Ranskill, was achieved by 1943. Many Waltham Abbey staff played a vital role in developing the new Explosive Royal Ordnance Factories, training staff and superintending production.

In 1945 the establishment re-opened as a research centre known as The Explosives Research and Development Establishment, or ERDE. In 1977 it became the Propellants, Explosives and Rocket Motor Establishment, Waltham Abbey, or PERME Waltham Abbey. As a research centre Waltham Abbey was responsible for military propellant and high explosives and expanded into the increasingly significant field of rocket propellants, solid and liquid and a range of specialised applications, e.g. 'snifters' for altering space vehicles direction when in flight, cartridges for firing aircraft ejector seats, engine and generator starter cartridges - these applications have been called 'a measured strong shove'. The rocket activity later extended to the production of rocket motors, including work on the Skylark project.

In 1984 the South site and the Lower Island works were handed over to Royal Ordnance Plc immediately before it was privatised. The North side however remained in Ministry of Defence control as a research centre; becoming part of the Royal Armament Research and Development Establishment.

After various reorganisations of Governmental research, the research centre finally closed in 1991, bringing to an end 300 years of explosives production and research.

Sale of the North site by the Ministry of Defence

Following funding from the Government and the Heritage Lottery Fund, the majority of the original northern site was saved. It has been decontaminated and a heritage visitor centre has been created allowing the public to learn about the science, nature and history of the site.

A large area of the north site is listed as the Waltham Abbey SSSI and another separate area is a scheduled ancient monument. Visitors can see exhibits related to gunpowder making, tour the site on a land train and see a demonstration narrow gauge railway. An attempt to demolish the cordite mills and replace them with dormitories for young people staying at a children's activity centre was rejected by Epping Forest District Council in 2016 after exposure in the national press.

Sale of the South site by Royal Ordnance

The South site also known as Quinton Hill was vacated by Royal Ordnance around the same time and was also decontaminated. This site was totally cleared of buildings and is being redeveloped, with new roads built, including the A121 link road to the M25 motorway. On one side of the A121 road the site is being developed with housing and on the other side a large distribution warehouse.

Much of the remaining land was converted into the 255 acres (103 ha) Gunpowder Park, which is part of the Lee Valley Park and was opened in 2004. The regenerated parkland is dedicated to the arts, science and wildlife.

All content from Kiddle encyclopedia articles (including the article images and facts) can be freely used under Attribution-ShareAlike license, unless stated otherwise. Cite this article:
Waltham Abbey Royal Gunpowder Mills Facts for Kids. Kiddle Encyclopedia.