Ware is an unincorporated community in Union County, Illinois, and is located near Jonesboro.

The earliest inhabitants of the area around Ware were of Late Woodland and Mississippian cultures. A village with four mounds was occupied between around 800 and 1300 A.D. One of the four mounds was destroyed in the construction of Illinois Route 3. The Ware Mounds and Village Site is situated just west of Ware. In January 1839, thousands of Cherokee Indians being forcibly relocated from their lands in Georgia to Indian Territory (Oklahoma) passed through Ware. Because floating ice the Cherokee were unable to cross the Mississippi River and camped along Dutch Creek. Due to the intense cold many died. 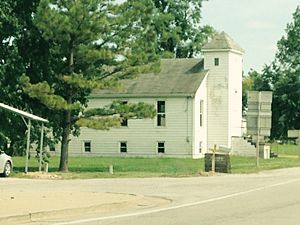 As of Census 2000, the population is 3,422 It is named for politician and farmer Jesse Ware.

All content from Kiddle encyclopedia articles (including the article images and facts) can be freely used under Attribution-ShareAlike license, unless stated otherwise. Cite this article:
Ware, Illinois Facts for Kids. Kiddle Encyclopedia.