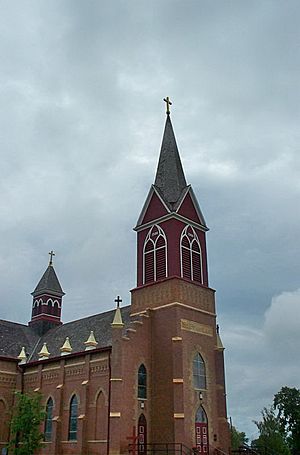 Warsaw is an unincorporated community in Walsh County, North Dakota in the United States. It is about 5.5 miles east of Minto (mailing addresses in Warsaw say "Minto, North Dakota" because mail is delivered by postal workers based there) and about 15 miles southeast of Grafton, the county seat. Although it is unincorporated, its name has official status. It is in an area of Walsh County that was settled in the 19th century by immigrants from Poland, and which remained a predominantly Polish-speaking area well beyond the middle of the 20th century. The Catholic Church of St. Stanislaus in Warsaw, built in 1901, is listed in the National Register of Historic Places. Many of the inscriptions on gravestones in the adjacent cemetery are in Polish.

St. Gianna's Maternity Home, which takes in women enduring "crisis pregnancies" who in some cases might otherwise seek abortions, is located in Warsaw. It is named in honor of Gianna Beretta Molla.

All content from Kiddle encyclopedia articles (including the article images and facts) can be freely used under Attribution-ShareAlike license, unless stated otherwise. Cite this article:
Warsaw, North Dakota Facts for Kids. Kiddle Encyclopedia.