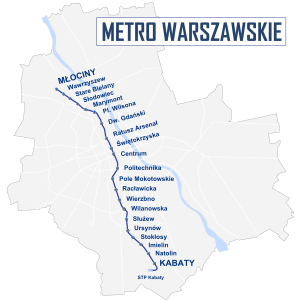 Warsaw Metro is a metro system in Poland.

Its first line was opened in 1995, with another section being added in 2008. It has 21 stations. The next two stations are being planned.

All content from Kiddle encyclopedia articles (including the article images and facts) can be freely used under Attribution-ShareAlike license, unless stated otherwise. Cite this article:
Warsaw Metro Facts for Kids. Kiddle Encyclopedia.