Kids Encyclopedia Facts
Not to be confused with Wasteland (event).

Wasteland Weekend is an annual festival held in Edwards, California. The event is listed as a full immersion event, with all participants required to adhere to the set theme. First held in 2010, it has since been held annually in September except 2020, when it was cancelled due to the COVID-19 pandemic. In 2019, the 10th-anniversary edition of Wasteland Weekend was held from September 25 to September 29. The festival includes post-apocalyptic themed costumes, campsites and vehicles, live bands and DJs, fire, burlesque and other performers, and Jugger matches. 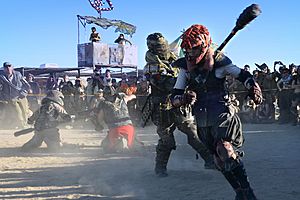 Drawing on Mad Max-themed events in other countries, as well as previous events known as "Roadwar USA", the first event was held in October in California City, California. It was organized by Karol Bartoszynski, Jared Butler and club promoter Jim Howard. The event featured exhibitions of movie replica cars and bikes, a gyrocopter flyover, vendors, fire dancers, and contests. Co-Founder James Howard left management in 2010. Co-founder Karol Bartoszynski left in 2014. The event is currently owned and organized by Jared Butler and Adam Chilson under their company Wasteland World Inc.

In 2017, the event expanded from four to five days, beginning on the last Wednesday of September. By the tenth consecutive year in 2019, the event had over 4,300 participants. With 2020 being cancelled, the 11th was deferred to 2021.

The theme of Wasteland Weekend draws heavily from apocalyptic and post-apocalyptic fiction, especially the Mad Max franchise, and requires all attendees to wear appropriately themed clothing. In the early years, Wasteland Weekend was billed as "Mad Max fun in the California sun". Other influences include Wasteland and the Fallout series of video games.

Wasteland Weekend 2017 was featured in the second season of The Boulet Brothers' Dragula in which the four remaining competitors had to take part in a photoshoot in a nearby desert and perform as a group at Wasteland Weekend.

All content from Kiddle encyclopedia articles (including the article images and facts) can be freely used under Attribution-ShareAlike license, unless stated otherwise. Cite this article:
Wasteland Weekend Facts for Kids. Kiddle Encyclopedia.