California City is a city located in northern Antelope Valley in Kern County, California, United States. It is 100 miles (160 km) north of the city of Los Angeles, and the population was 14,120 at the 2010 census. Covering 203.63 square miles (527.4 km2), California City has the third-largest land area of any city in the state of California, and the largest city by land area in California that is not a county seat and/or the state capital.

Much of the workforce of Edwards Air Force Base, which is located 18 miles (29 km) southeast of the city, is made up of city residents. Other major sources of employment include California City Correctional Center (California Department of Corrections and Rehabilitation); Mojave Air and Space Port and its flight test operations; and the Hyundai/Kia Proving Grounds located in the rural southwestern part of the city. California City has a park, a PGA golf course, and a municipal airport.

The area where California City now exists was largely uninhabited prior to the 1960s. Padre Francisco Garcés, a Franciscan missionary, camped at Castle Butte in what is now California City in 1776 during the Juan Bautista de Anza expedition of modern-day California and Arizona, then part of Alta California.

In the late 19th century, the Twenty Mule Team Trail, which carried loads of borax to the railhead in Mojave from Harmony Borax Works mines in the east, ran through the California City area. 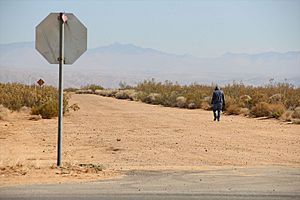 California City had its origins in 1958 when real estate developer and sociology professor Nat Mendelsohn purchased 80,000 acres (320 km2) of Mojave Desert land with the aim of master-planning California's next great city. He designed his model city, which he hoped would one day rival Los Angeles in size, around a Central Park with a 26-acre (11 ha) artificial lake. Growth fell well short of his expectations. Today, a vast grid of crumbling paved roads which define residential blocks, extend well beyond the developed area of the city. Satellite photos underscore its claim to being California's 3rd largest geographic city, 34th largest in the US. California City was incorporated on December 10, 1965. This could be considered an example of a failed planned city. 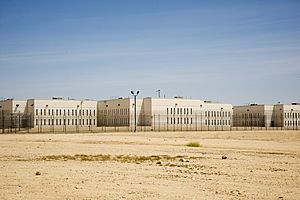 The California City Whiptails were a professional baseball team competing in the unaffiliated Pecos League. The team folded in 2019. Their home games were played at Balsitis Park.

Studies for a privately built and owned 2000-4000-bed prison on the east side of town began in 1995, and an environmental impact statement on a 550-bed facility was completed in 1996. Contracts were signed between the city and Corrections Corporation of America and it was built in 1999. The 2304-bed California City Correctional Facility prison housed federal inmates for the U.S. Marshal Service and U.S. Immigration and Customs Enforcement from 2006 to 2013, then was leased to the California Department of Corrections and Rehabilitation in 2013 for $28.5 million yearly in response to a federal order to reduce overcrowding at the state's prison facilities.

California City is served by Highway 14 to the west and Highway 58 to the south. Kern Transit provides direct bus service to Mojave, Lancaster, and Ridgecrest with connections to Tehachapi and Bakersfield. The direct line to Lancaster also provides a direct connection with Metrolink's Antelope Valley Line, with service into Los Angeles. Within the city, California City Dial-A-Ride (DAR) Transit provides transportation on a demand-response basis on weekdays (except on holidays when City Hall is closed).

As an incorporated city that does not contract with Kern County, California City has its own police and fire departments.

All content from Kiddle encyclopedia articles (including the article images and facts) can be freely used under Attribution-ShareAlike license, unless stated otherwise. Cite this article:
California City, California Facts for Kids. Kiddle Encyclopedia.