Tehachapi ( Kawaiisu: Tihachipia, meaning "hard climb") is a city in Kern County, California, in the Tehachapi Mountains, at an elevation of 3,970 feet (1,210 m), between the San Joaquin Valley and the Mojave Desert.

The Tehachapi area is known for the nearby Tehachapi Loop (a popular railfan site), Tehachapi Pass Wind Farm, the Tehachapi Depot Museum, the Tehachapi Museum, the Tomo-Kahni State Historic Park and Tomi-Kahni Resource Center (Native American), and excellent air conditions for gliding. Ten miles (16 km) to the west, at Keene, is the National Chavez Center, established to share the legacy of Cesar Chavez.

The Tehachapi area is known for the nearby Tehachapi Loop (a popular railfan site), Tehachapi Pass Wind Farm, The Indian Point Ostrich Ranch, the Tomo-Kahni State Historic Park and Tomi-Kahni Resource Center (Native American), and excellent air conditions for gliding. Ten miles to the west at Keene, is the National Chavez Center, established to share the legacy of Cesar Chavez.

The California Correctional Institution maximum security prison, also known as Tehachapi State Prison, is in the area; as is proximity to Edwards Air Force Base (40 miles to the east). 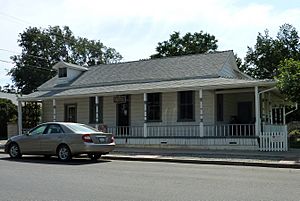 The Errea House, originally built in the early 1870s in Tehichipa, was moved to Techachapi in 1900 and is now a museum; it is also listed on the NRHP.

The Kawaiisu people (also Nuwu ("people" in Kawaiisu), or Nuooah) are the Native American tribe whose homeland was the Tehachapi Valley, and seasonally the southern Sierra Nevada and Mojave Desert, for thousands of years.

One possibility for the origin of the name Tehachapi comes from the Kawaiisu language. It may be derived from the word for "hard climb" or tihachipia, according to the Tomi-Kahni Resource Center. The settlement has been formerly known and spelled as: Tehachapai; Tehachapa; Tehachepi; Tehachipi; and Summit Station.

Previously known as 'Old Town', Tehachapi was established in the 1860s. It is now registered as California Historical Landmark #643 for being the oldest settlement in the Tehachapi Valley.

Construction of the original Southern Pacific-SP railroad depot was the beginning of the downtown core. It is now on the National Register of Historic Places (NRHP)—and was the oldest building in downtown Tehachapi until it burned in June 2008. The building had been in the final stages of becoming a museum. It has since been rebuilt using the original plans with only minor modifications to meet modern building codes. The new depot was dedicated on June 5, 2010.

On July 21, 1952 Tehachapi was devastated by a magnitude 7.5 earthquake on the little-known White Wolf Fault.

Tehachapi is best known for the 7.3 1952 Kern County earthquake on the White Wolf Fault in 1952. At the time, the earthquake was the largest in Southern California in the twentieth century and the largest since the 1872 Lone Pine earthquake. It was felt as far away as Reno, Nevada. Twelve people died in the quake and severe damage was done to buildings and rail lines in the area. 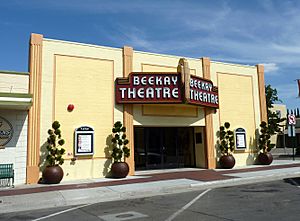 The BeeKay Theater is a historic theater converted into a live theater for the Tehachapi Community Theater in 2008.

Tehachapi has a thriving and growing cycling community for both mountain biking and road cycling. The Tehachapi Gran Fondo, a mass cycling event in September, was named Best Century by Cycle CA Magazine two years in a row. The event offers several distance choices, the longest being around 100 miles and 7,000 ft of climbing through wind farms, vegetable farms, orchards and mountains.

Tehachapi boasts two local orchestras. The Tehachapi Community Orchestra Now called the Tehachapi Symphony Orchestra, was founded in 1997 by Joan Samara and Deborah Hand as an outgrowth of the Da Camera Players String Ensemble, and incorporated in 1998 by Gayel Pitchford. It performs 5 free-to-the public concerts each year, with familiar selections from the classical canon. This orchestra and its founders' vision were profiled in the Sept/Oct 2005 issue of Symphony magazine. (See also The Tehachapi News October 12, 1997)

The Tehachapi Pops Orchestra, founded in 2006 by Deborah Hand, plays an eclectic blend of popular and jazz music, as well as original compositions. T-Pops performs 5 to 6 concerts each year. All are free to the public except for the Halloween concert held at the Beekay Theater with the local theater group, the Tehachapi Community Theater.

As of 2010[update], a local theater group, the Tehachapi Community Theater, performs in the restored downtown BeeKay Theater.

The city has several local news publications, including the Tehachapi News (since 1899) and The Loop.

Two FM radio stations broadcast from Tehachapi, however they originate in neighboring towns and feature no local Tehachapi programming:

As of 2010[update], an effort is underway by the Tehachapi Media Foundation to initiate a local web-based radio station.

Tehachapi has been host to productions by both Hollywood productions and independent filmmakers, as well as being frequently mentioned, particularly during the noir era.

Perhaps the first movie to be filmed in Tehachapi was The Lady of the Dugout (1918), which starred former outlaws Al and Frank Jennings playing themselves. The brother outlaws were well known to Americans of the time.

Referencing the local women's prison was a common manner in which Tehachapi received mentioned in noir film, including Double Indemnity in which Fred MacMurray's character tells of one woman who killed her husband: "All she collected was a three-to-ten stretch in Tehachapi."

In The Maltese Falcon, Sam Spade (played by Humphrey Bogart) tells a female criminal and love interest, "Well, if you get a good break, you'll be out of Tehachapi in twenty years and you can come back to me then." In the book, the reference was not to Tehachapi but to San Quentin.

Nocturne (1946) featured a housemaid mysteriously referred to as the "Tehachapi Debutante," and 1948's The Hunted has a heroine fresh out of Tehachapi after four years for jewelry theft.

In The Story of Molly X (1949), Molly X is the leader of a San Francisco gang sent to Tehachapi for her role in a burglary attempt instead of San Quentin for execution. Most of the film then takes place at the prison, as Molly goes from being trouble to a model prisoner.

In 1001 Rabbit Tales, Bugs Bunny tells the sultan's son that Hansel and Gretel's witch was sent to Tehachapi.

In Star Trek Generations (1994), actors Patrick Stewart and William Shatner appear in a scene filmed in the Tehachapi mountains.

The Christina Applegate vehicle originally titled Tehachapi sends her character to Tehachapi because her lover is in prison here. The movie was eventually released under the title Across the Moon (1995).

The fourth season of the teen-geared television series, Endurance produced by the Discovery Kids Network was filmed in Tehachapi and aired from 2005–2006.

In Mac and Me (1988), after the characters state they have to "drive to Woolworth's in Palmdale" the next shot shows them driving up a dirt road through a Tehachapi wind farm. Similarly, Terminal Velocity (1994) has a fight sequence filmed on top of a hill in one of the farms.

Herbie: Fully Loaded (2005) shot a sequence at a wind farm and on Oak Creek Road, which winds through several farms. 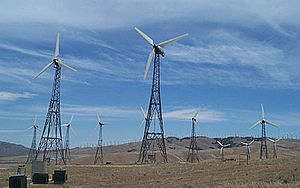 Wind turbines in the mountains

Wine grapes were grown in the area from the 19th century up until prohibition. A 2007 application to the Alcohol and Tobacco Tax and Trade Bureau (TTB) for the "Tehachapi/Cummings Valley AVA" was declined due to insufficient planted acreage. The Tehachapi Mountains American Viticultural Area was approved in 2020. It is approximately 58,000 acres (23,000 ha).

Roughly half of Tehachapi's water supply originates as groundwater that is replenished by local precipitation; the other half comes from the California Aqueduct.

The California Correctional Institution, a maximum security prison also known as Tehachapi State Prison, is in the area. Edwards Air Force Base lies 40 miles (64 km) to the east.

The Tehachapi area has been a center for renewable wind energy, containing 4,531 turbines that produce 3,200 megawatts of electricity as of 2019. In the same year, Amazon announced it would begin sourcing wind energy from Tehachapi as part of its goal to become carbon-neutral by 2040. The Tehachapi Energy Storage Project, commissioned in 2014, is located at Monolith Substation.

In 2019, a Walmart store opened in Tehachapi, which would provide up to 200 full and part-time jobs.

Tehachapi Municipal Airport is located approximately one mile east of the Park and Ride facility.

All content from Kiddle encyclopedia articles (including the article images and facts) can be freely used under Attribution-ShareAlike license, unless stated otherwise. Cite this article:
Tehachapi, California Facts for Kids. Kiddle Encyclopedia.