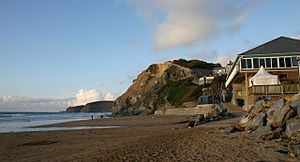 Watergate Bay (Cornish: Porth Tregoryan, meaning cove at Coryan's farmstead/village) is a long bay or beach flanked by cliffs centred two miles NNE of Newquay below the B3276 Newquay to Padstow road near the hamlet of Tregurrian in Cornwall, United Kingdom. It faces the Atlantic Ocean, adjacent to Newquay Bay. The 2-mile (3.2 km) sandy beach and exposed site is popular for non-powered water sports, kite flying, and sand art.

In May 2007 it played host to the English Nationals Surfing Championships. 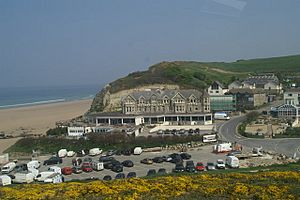 The Watergate Bay Hotel and Fifteen Cornwall, a restaurant set up by celebrity chef Jamie Oliver, are just above the beach and several caravan and camping sites are within easy reach.

The Watergate Bay Hotel first opened in July 1900.The Hotel was designed by architect Joshua Harrison Goodland. The Hotel hoped to cater for railway tourists that were expected to arrive on the Padstow, Bedruthan & St.Mawgan Railway line, which would also extend to Newquay however the line was never constructed. Prior to this it was farmland. 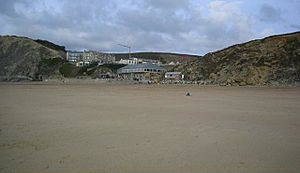 Watergate Bay has been used as a location for the following productions:

All content from Kiddle encyclopedia articles (including the article images and facts) can be freely used under Attribution-ShareAlike license, unless stated otherwise. Cite this article:
Watergate Bay Facts for Kids. Kiddle Encyclopedia.