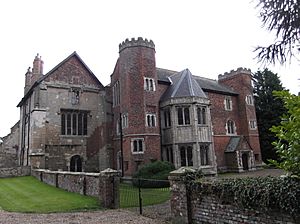 Watton Priory was a priory of the Gilbertine Order at Watton in the East Riding of Yorkshire, England. The double monastery was founded in 1150 by Eustace fitz John.

The present building dates mainly from the fourteenth and fifteenth centuries. A house was added in the nineteenth century. It is a Grade I listed building. King Edward I of England imprisoned young Scottish Princess Marjorie Bruce there after her capture.

The Nun of Watton was the protagonist of events, recorded by St Ailred of Rievaulx in De Sanctimoniali de Wattun. The nun had been admitted to the holy life as a toddler but the young woman was unsuited to the enforced celibacy of the life of a nun and became pregnant by a lay brother in the attached male community.

All content from Kiddle encyclopedia articles (including the article images and facts) can be freely used under Attribution-ShareAlike license, unless stated otherwise. Cite this article:
Watton Priory Facts for Kids. Kiddle Encyclopedia.