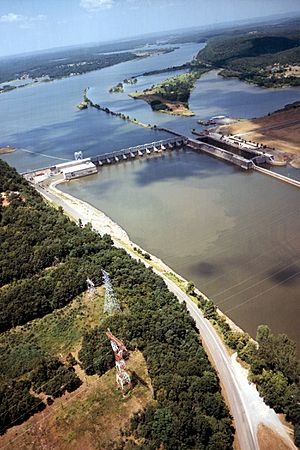 Webbers Falls Lock and Dam on the Arkansas River March 3, 1999

The lock and dam are about 3 miles (4.8 km) from the town of Webbers Falls, Oklahoma. There is an observation platform and visitor facility at the lock and dam, where visitors can view the operation of the locks during passage of river craft.

The project was authorized by Congress in the River and Harbor Act July 4, 1946, and amended by the Flood Control Acts of 1948 and 1950. Construction began in January 1965 and became operational for navigation in December 1970.

All content from Kiddle encyclopedia articles (including the article images and facts) can be freely used under Attribution-ShareAlike license, unless stated otherwise. Cite this article:
Webbers Falls Lake Facts for Kids. Kiddle Encyclopedia.