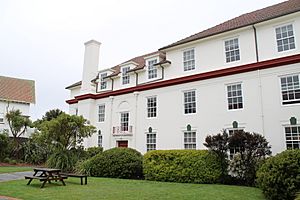 In 1926, the death of William Weir left the University with an estate of £77,500 to build its first hall of residence for male students. Although work began in 1930, the building had to be redesigned when the Napier earthquake struck in February 1931. On 1 March 1933, the governor-general planted a pohutukawa and officially opened Weir House. Sixty-five students took up residence that year in the original William Weir wing. By 1935, there was a waiting list.

In 1968, the Department of External Affairs funded the James Hutchison Wing as part of the Colombo Plan. This was later renovated and extended in 1994. After litigation due to the will of William Weir stating his money was to be used for a male hall of residence, female students were finally allowed to take up residence at Weir House in 1979 as the hall had built its extension through government funding.

The former Japanese ambassador's residence was acquired and converted to Andrea Brander House in 1987, accommodating students who wish to live in an alcohol free area. In 2006, a new alcohol-free block called Te Whānau was built and has a glass lounge (named Piringa), which is used as a common area.

In 2015 and 2016, Weir House residents' drinking was the cause of media coverage, with near-by Kelburn residents concerned about noise and litter.

In June 2017, Victoria University proposed that the position of Head of Hall across its six halls be cut, and replaced by three Hall General Managers. The cited reason was that students had stated in a survey that pastoral care was not important to them.

All content from Kiddle encyclopedia articles (including the article images and facts) can be freely used under Attribution-ShareAlike license, unless stated otherwise. Cite this article:
Weir House (Victoria University of Wellington) Facts for Kids. Kiddle Encyclopedia.