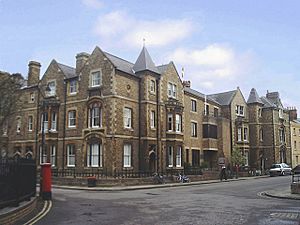 Rewley House on the south side of Wellington Square at the junction with St John Street (on the right). 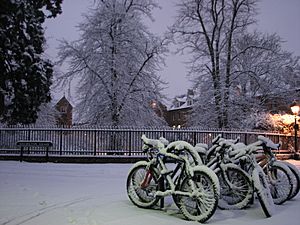 Wellington Square in the snow.

The street name is used to refer metonymically to the central administration of the University of Oxford, which in 1975 moved from the Clarendon Building to new buildings with an address in the Square but built at that time, along with graduate student accommodation, along the adjacent Little Clarendon Street.

The University's Department for Continuing Education is in the Square in Rewley House, which was designed in 1872 by the Oxford architect E.G. Bruton, who also laid out the square. This was the initial location of Kellogg College. Number 47 houses the administrative offices of the Faculty of Medieval and Modern Languages, as well as the University's Slavic and Modern Greek collections. Barnett House (named after the social reformer Canon Samuel Barnett and his wife Henrietta), home of the Department of Social Policy and Intervention is found along one side of the square.

The Oxford University Broadcasting Society used a studio of Radio Oxford in the Square.

All content from Kiddle encyclopedia articles (including the article images and facts) can be freely used under Attribution-ShareAlike license, unless stated otherwise. Cite this article:
Wellington Square, Oxford Facts for Kids. Kiddle Encyclopedia.