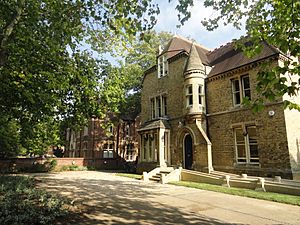 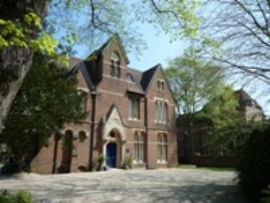 Kellogg College is a graduate-only constituent college of the University of Oxford in England. Founded in 1990 as Rewley House, Kellogg is the university's 36th college and the largest by number of students. It hosts research centres including the Institute of Population Ageing and the Centre for Creative Writing, and is closely identified with lifelong learning at Oxford.

As with most of the university's graduate colleges, Kellogg College has an egalitarian spirit which is reflected by a lack of formal separation between fellows and students. The college has no high table and, uniquely among Oxford's colleges, its grace is in Welsh. It is also unique in having its own tartan.

The president of the college is Jonathan Michie who is Professor of Innovation & Knowledge Exchange and also holds the position of director of the Oxford University Department for Continuing Education, the vice president is Judith Hillier. Michie succeeded the founder of the college, Geoffrey Thomas, as president.

Kellogg College was the first home for part-time students at the University of Oxford and many of the students who join the college continue to work in their professions while they study. The college continues to promote ideals of access, openness, and inclusion. The college has accepted both women and men as students since its foundation.

The college came into being on 1 March 1990 (as Rewley House) and was renamed in honour of Will Keith Kellogg on 1 October 1994, in recognition of the generous support given by the W. K. Kellogg Foundation to the university over the preceding decades.

Kellogg maintains a strong presence: former Heineken Cup winner Dom Waldouck was elected as the university's Rugby Captain for 2018 while Johanna Dombrowski was a recent President of Oxford University RFC women's team. Kellogg's football club was founded in Michaelmas 2012 and has been competing in the third division of the University's Middle Common Room Football League since.

Kellogg students row for Christ Church Boat Club in college competitions and also row in the University Boat Races against Cambridge. In 2013, Kellogg students rowed in the victorious men's, women's, women's lightweight and reserve boats. Later in 2016, alumnus Paul Bennett won a gold medal for Great Britain in the Rio Olympics as did current student Grace Clough in the Paralympics.

Whilst Kellogg College does not have its own dedicated gym, members of the college are provided with free access to the University Sports Centre on Iffley Road. Additionally, as Kellogg College is a postgraduate-only college, all of its members are eligible to join The Oxford University Club free of charge. For an additional fee, members may utilise the onsite gym.

Kellogg College has its own punt, currently moored at the Cherwell Boathouse on Bardwell Road. The punt is free to use by members of the college, but must be booked in advance.

All content from Kiddle encyclopedia articles (including the article images and facts) can be freely used under Attribution-ShareAlike license, unless stated otherwise. Cite this article:
Kellogg College, Oxford Facts for Kids. Kiddle Encyclopedia.