West Lebanon is a town in Pike Township, Warren County, in the U.S. state of Indiana. The population was 723 at the 2010 census.

West Lebanon was laid out and platted in the fall of 1830 by Ebenezer Purviance, John G. Jemison and Andrew Fleming, and consisted of 64 lots. Originally named Lebanon, the name was changed to West Lebanon in 1869 when the town was incorporated, possibly in deference to the Boone County community of the same name which established its post office on December 15, 1832, just eleven days before their own.

Not being close to any waterways, West Lebanon's early growth was relatively slow and for many years had no more than 20 families. However, with the completion of the Wabash Railroad line one mile north of town in 1856, the community's fortunes improved and led to most of the town relocating closer to the station. The original settlement area became known as Old Town.

A Carnegie library was built at the corner of High Street and North Street in 1916 and continues to operate as the West Lebanon-Pike Township Public Library.

Fire destroyed part of West Lebanon's business district the evening of January 26, 2011, destroying a row of buildings along the west side of High Street between First and North streets. 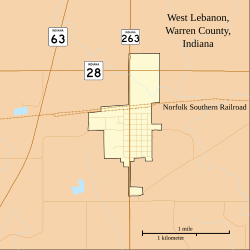 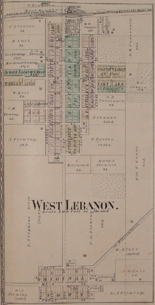 Each year on the last weekend of September the town holds the West Lebanon Patriot Festival, an event named for the Patriot mascot of nearby Seeger High School. The festival features flea market vendors, a parade, cake walks, live music, fireman's water ball competition, outhouse races and other attractions. The festival was previously known as West Lebanon Fun Days.

All content from Kiddle encyclopedia articles (including the article images and facts) can be freely used under Attribution-ShareAlike license, unless stated otherwise. Cite this article:
West Lebanon, Indiana Facts for Kids. Kiddle Encyclopedia.