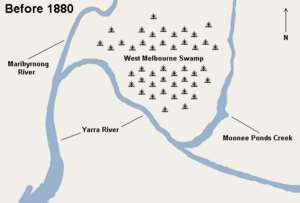 Lower Yarra River and West Melbourne Swamp before its drainage. 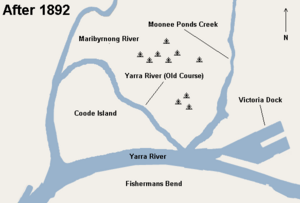 The West Melbourne Swamp also known as Batman's Swamp, was a large saltwater wetland located to the west of the city of Melbourne, Victoria. It was drained under the design and supervision of Public Works Department (Victoria) engineer William Thwaites (engineer) from around 1890, and became the site of a canal, the outlet to Moonee Ponds Creek, railway yards and some of Melbourne's docks including Appleton Dock.

The swamp was an important resource for Aboriginal people,

Surveyor Charles Grimes was the first to observe the swamp, when he climbed a nearby hill during his 1803 voyage to chart Port Philip Bay. It became known as Batman's Swamp, after pioneer settler John Batman, who built a house at the base of the nearby Batman's Hill in April 1836, where he lived until his death in 1839. In 1912, George Gordon McCrae (son of diarist Georgiana McCrae) described it as being, in 1841: a real lake, intensely blue, nearly oval, and full of the clearest salt water. The lagoon was also described as; having a bottom of solid blue clay and laying at the high water level while the flats surrounding it were about one metre above high tide...

Drainage of the swamp was considered from the mid century, but did not commence in earnest until about 1877, with a steam operated pump set up near Brown's Hill at South Kensington, and drains dug along Swamp Road, which was later reconstructed as Dynon Road connecting to West Melbourne. In 1907 the Footscray contractor Michael Walsh won a large state government contract to undertake the drainage. In the depression of the 1930s, the swamp margins and the bottom of Dudley Street became the site of a shantytown of unemployed known as Dudley Flats.

All content from Kiddle encyclopedia articles (including the article images and facts) can be freely used under Attribution-ShareAlike license, unless stated otherwise. Cite this article:
West Melbourne Swamp Facts for Kids. Kiddle Encyclopedia.