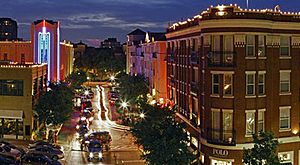 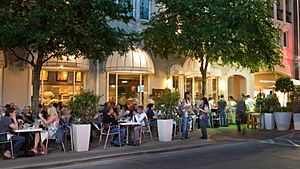 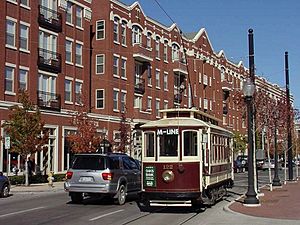 The West Village District is a walkable urban village in the Uptown area of Dallas, Texas. West Village is located at the northern edge of Uptown along McKinney Avenue and is bordered by Lemmon Avenue, Cole Avenue, Haskell Drive and Central Expressway. West Village proper has 88 retail, restaurant and entertainment tenants within 244,000 square feet (22,700 m2) and contains approximately 700 residential units. This has been the catalyst for the West Village District, which contains approximately 3,600 residential units, an emerging office market (including the Richard's Group Corporate Headquarters), and an estimated 500,000 square feet of gross leasable space- all within walking distance.

West Village, opened in 2001, was built on an undeveloped assembly that was cleared in the 1980s for a large, master-planned urban community to be known as CityPlace. West Village was developed by Urban Partners, Henry S. Miller Interests, Phoenix Property Company, and The CityPlace Company. The original development, designed by Washington architect David M. Schwarz, is a mixed-use development with the retail portion managed by Urban Partners and the residential component managed by CIM. The name West Village is completely made up and is an attempt to link the development to the urban neighborhood in New York City. Over subsequent years the development has continued to stimulate further development as thousands of urban apartment homes have been constructed in the immediate vicinity.

The Katy Trail, a noted Dallas running and biking corridor, is within a block of the development.

All content from Kiddle encyclopedia articles (including the article images and facts) can be freely used under Attribution-ShareAlike license, unless stated otherwise. Cite this article:
West Village, Dallas Facts for Kids. Kiddle Encyclopedia.