Westerleigh is a neighborhood on Staten Island, New York in New York City.

Westerleigh is located in the northwest quadrant of the borough and is bounded in the east by Manor Road, the west by the Martin Luther King Jr. Expressway, the south by Victory Boulevard and to the north by Forest Avenue. Westerleigh occupies high ground on Staten Island, which itself contains the highest point of land from Maine to Florida along the eastern coast of the United States, Todt Hill at 400 feet (120 m) above sea level. While not as high as Todt Hill, from certain vantage points Westerleigh affords views of Newark, New Jersey and further afield on a clear day. The neighborhood has an abundance of coniferous and deciduous trees; including acacia, blue spruce, cedar, chestnut, elm, honey locust, paulonia, pin and royal oak, sweet gum, sycamore, tulip poplar, yew and many types of pine, some of which reach 75 feet (23 m) or more in height. On the neighborhood's southern side near the Staten Island Expressway is Ingram Woods, a remnant of a larger forest that has been preserved as an undeveloped park. 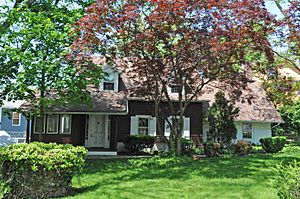 Westerleigh attracted notice when a temperance group, the National Prohibition Campground Association, bought 25 acres (10 ha) of land there in 1877, and named the property Prohibition Park — noted chiefly today for the fact that the official climate records for Staten Island are compiled at the site. Many of the local streets are named after early leaders of the Prohibition movement (Neal Dow, Clinton B. Fisk), or for states that supported anti-liquor laws (such as Maine and Ohio).

Some of Westerleigh's earliest residents excelled in letters, including Isaac K. Funk, co-founder of Funk and Wagnalls, and poet Edwin Markham. Heiress Amy Vanderbilt also once lived there, as does minor b-movie actor Brian "the Duke" Crimmins. The neighborhood gained much local attention for the abundance of patriotic decorations festooned on its homes in the aftermath of the September 11, 2001 attacks.

One of the oldest Boy Scout groups, Troop #2, was formed in 1912 and operates out of the Immanuel Union Church on Jewett Avenue. Westerleigh is also home to the oldest tennis club in the US, tennis having been introduced to the US (from England, via Bermuda) at the home here of Mary Ewing Outerbridge. She played the first game in the US at the Staten Island Cricket Club on an hourglass shaped court. The location, on College Avenue, still sports a tennis court.

Westerleigh Park acts as the unofficial heart of the North Shore neighborhood.

The Peter Houseman House was listed on the National Register of Historic Places in 1982.

Westerleigh is served by a number of local and express buses.

All content from Kiddle encyclopedia articles (including the article images and facts) can be freely used under Attribution-ShareAlike license, unless stated otherwise. Cite this article:
Westerleigh, Staten Island Facts for Kids. Kiddle Encyclopedia.