Westfield Garden State Plaza, commonly referred to as simply Garden State Plaza, is an upscale shopping mall located in Paramus, New Jersey. It is owned and managed by Unibail-Rodamco-Westfield, and located at the intersection of Route 4 and Route 17 near the Garden State Parkway, about 15 miles west of Manhattan. Opened in 1957 as the first suburban shopping mall in New Jersey, it has 2,118,718 sq ft (196,835.3 m2) of leasable space, and housing over 300 stores, it is the second-largest mall in New Jersey, the third-largest mall in the New York metropolitan area, and one of the highest-revenue producing malls in the United States.

The mall had sales of $500 per square foot in 2013, about $320 above the national average; Garden State Plaza is one of the most profitable malls in the country. In a study of malls in the United States performed on behalf of CNBC, Westfield Garden State Plaza ranked ninth in the nation, based on sales of $950 per square foot. Most of the mall, especially retail outlets, is closed on Sunday in accordance with state and local blue laws.

Garden State Plaza opened in 1957 as the first suburban mall in New Jersey. Its original three anchor stores were Bamberger's, Gimbel's, and J.C. Penney, with the rest of the mall consisting of 90 smaller specialty shops. It was called "the largest shopping center in the world."

It was built by the Muscarelle Construction Company for owner/developer R.H. Macy & Co. as an open-air shopping "plaza". Total construction costs were $26 million in 1957 for the mall and its original group of 90 stores. 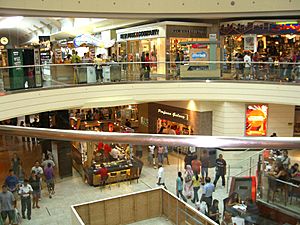 Garden State Plaza drew much business from nearby New York towns and cities, whose shoppers wandered across state lines to take advantage of New Jersey's lower sales taxes and its policy that exempted clothing purchases from sales tax. By 1961, it was the world's largest mall.

The mall was enclosed between 1981 and 1984 in response to competitive pressure from newer fully enclosed malls such as the Willowbrook Mall in nearby Wayne. Later in the 1980s, a lower level was added by converting a former basement truck tunnel into retail space. The existing J. C. Penney basement was given a new entrance on the lower level, but since the floors were at slightly different elevations, that entrance features the shortest escalator in North America, at a height of six steps.

In 1987, Gimbel's parent company, BATUS, which had been selling off its Gimbel's stores, sold its Garden State Plaza location to Associated Dry Goods. Associated reopened the store as the new headquarters for its Hahne's department stores. Hahne's had previously been headquartered at its flagship store in downtown Newark, which the company wanted to close. In the mid-1990s, a Nobody Beats the Wiz store was added as an out-parcel to the mall site; it later became a Best Buy store that closed in 2018. The site was then occupied by a toy store called Toy City, owned by Party City.

In 1996, Garden State Plaza marked the completion of a $200 million expansion and major remodeling project that added over 700,000 sq ft (65,000 m2) of retail space and two four level parking structures, Parking Garage A, and Parking Garage B. The downstairs food court was connected to the lower level from the previous expansion. J. C. Penney grew by 62,000 to 150,000 sq ft (5,800 to 13,900 m2), and two new anchors were added, a 150,000 sq ft (14,000 m2) Neiman Marcus on three levels and a 135,000 sq ft (12,500 m2) Lord & Taylor on two levels, both targeted at the upscale fashion-conscious shopper. A Venetian carousel was also added at that time of the expansion and remodeling and was located in front of Macy's. The carousel closed in 2016, and was removed so that the mall could use that space for performances by the Bergen Performing Arts Center.

Westfield acquired the mall in 1986 from Macy's in a deal that also included New Jersey's Brunswick Square Mall and Quaker Bridge Mall.

The Borough of Paramus petitioned the New Jersey Supreme Court to review a decision by borough's Planning Board, asking it to review the plans to construct a 163,000-square-foot (15,100 m2) "entertainment lifestyle precinct" at the mall that included a 16-screen AMC movie theater and 10 specialty retail stores, along with a 158,000-square-foot (14,700 m2) parking lot below the new wing, known as "Parking Garage C". The petition was turned down, and the mall celebrated its 50th anniversary with the new expansion and stores opened on May 25, 2007.

In 2013, the mall rebuilt Parking Garage B, expanding it to five levels and 1,800 parking spaces. Adjacent were built a new guest services office and a valet lounge. A year later, the mall added a 55,000 square feet (5,100 m2) wing at a cost of $160 million known as the "Fashion District" that has 22 stores and restaurants.

In January 2018, Best Buy announced that they would be closing their two-level store at Garden State Plaza and would be relocating to a single-floor building to be constructed at The Outlets at Bergen Town Center nearby. The store officially moved on April 14, 2018. J. C. Penney closed on March 10, 2018. Both stores are expected to be redeveloped by Westfield in the future, though as of October 2018, no such development has been announced. In July 2018 North Jersey Media Group reported that Uniqlo will be relocating from Westfield Garden State Plaza to Paramus Park. The Paramus Park Uniqlo officially opened on March 1, 2019. Westfield Garden State Plaza announced plans to build a mixed development center in the old JCPenney space.

In July 2019, Tru Kids announced that one of two Toys "R" Us stores being opened by that company as part of that toy retailer's recovery from Chapter 11 bankruptcy in 2017 and its acquisition by Tru Kids, would be at Garden State Plaza. (The other would be opened at The Galleria in Houston.) Eschewing the "warehouse" arrangement of previous stores, Toys "R" Us stores, these revamped versions were much smaller, and centered around open play areas, interactive displays and areas for special events and birthday parties. It opened on November 27, 2019. However it closed on January 28, 2021.

On August 27, 2020, it was announced that Lord & Taylor was going out of business, and would therefore be closing all of its stores, including the Garden State Plaza location.

Due to state blue laws and more restrictive limitations in place in Paramus, Garden State Plaza is almost completely closed on Sundays, except for some of the restaurants and the movie theater, all of which have special Sunday entrances. Garden State Plaza's parking lot is accessible, on Sundays, only from the Route 4 and Route 17 access points. Gates are down so that the access roads from the secondary streets are blocked. The Paramus Borough Code forbids the performance of any "worldly employment" on Sunday, with very limited exceptions. These laws were enacted shortly after Garden State Plaza opened out of fear that the mall would cause high levels of traffic congestion on the highways in the borough. During the aftermath of Hurricane Sandy, Governor of New Jersey Chris Christie issued an executive order that suspended the state's blue laws, allowing stores to be open on Sunday, November 4, 2012, for the benefit of those severely affected by the hurricane. A week later, after a public outcry that included the mayor of Paramus announcing that the borough would continue to enforce its own restrictions, the state's blue laws were put back into effect.

All content from Kiddle encyclopedia articles (including the article images and facts) can be freely used under Attribution-ShareAlike license, unless stated otherwise. Cite this article:
Garden State Plaza Facts for Kids. Kiddle Encyclopedia.