The Westland petrel (Procellaria westlandica), also known as the Westland black petrel or tāiko, is a moderately large seabird in the petrel family Procellariidae from New Zealand.

The Westland petrel is a stocky looking bird, weighing around 1100g. It is entirely dark blackish-brown, with black legs and feet. Some individuals may have a few white feathers. The bill is pale yellow with a dark tip. The Māori name is tāiko, which also refers to the black petrel, Procellaria parkinsoni.

Procellaria westlandica is endemic to New Zealand and is classified as Endangered in the IUCN Red List. It breeds only in a narrow area on the West Coast of the South Island. This breeding range covers an 8 kilometre wide strip between Barrytown and Punakaiki, specifically between the Punakaiki River and Waiwhero (Lawson) Creek and comprises forest-covered coastal foothills either within the Paparoa National Park, on other conservation land, or on land belonging to Forest And Bird. They are one of very few petrel species that still nest on the mainland. The Westland petrel nests in burrows dug 1–2 metres into the hillside, often on a steep slope. Many breeding colonies, particularly on these steep sites, were damaged by landslips and tree damage associated with Cyclone Ita in 2014. There are around 29 colonies of petrel in the breeding territory. Each colony has between 50-1000 burrows. Colonies can be located anywhere from 50–200 meters above sea level. During the breeding season adults may be seen in waters around New Zealand from Cape Egmont to Fiordland in the west, through the Cook Strait, and from East Cape to Banks Peninsula in the east. They also range across areas of the Pacific and Tasman around the Subtropical Convergence. In the non-breeding season, Westland petrels migrate east to South American waters and feed in the Humboldt Current off the coast.

The Westland petrel spends the majority of its life at sea, only returning to land to breed. They are winter breeders, who arrive at their breeding grounds annually in late March or early April to prepare their burrows for nesting. Colonies are noted to be very vocal around three weeks before nesting, during the time when courtship and mating occur. Petrel form life time pair-bonds. The female lays a single egg between May and June that hatches two months later, between August and September. Both the male and female taking turns incubating the egg. After hatching, the parents care for the chick for about two weeks. After this time the chick is left alone, but is fed at night. If either parent dies, the breeding attempt will fail. The young birds usually don't fly for another two months and moulting occurs in their non-breeding season. For Westland petrels this season falls between October and February, during migration to South America. The immature birds moult prior to older individuals. In total, chick rearing takes between two and four months. After leaving the nesting sites, fledglings may not return for up to 10 years. Beginning in late September to late November, Westland petrel migrate to South American waters and are often found off the coast of Chile. Individuals usually remain solitary during this time, rejoining the colony when the next breeding cycle begins. 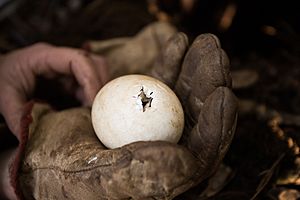 Petrels are nocturnal and therefore hunt at night, preying primarily on fish, some squid, and less commonly on crustaceans. Westland petrels are known to opportunistically scavenge fish from waste discarded by hoki fisheries during their breeding season as it overlaps with the fishing season, switching back to natural foraging at other times. They capture their prey by surface seizing, surface diving, and, less frequently, pursuit plunging. They have been recorded diving up to 8m. Their strong vision allows them to spot prey, and recent studies have shown that smell is also important to petrel foraging, specific odors seeming to attract the birds to certain areas.

Predators of Westland petrel (stoats, rats and weka) strike during the breeding season when the birds are on land, preying on chicks in open burrows and adults. Feral cats and dogs are also infrequent predators of petrels. None of these predators are considered to be a significant threat to petrel colonies. While not predators, concerns have been raised about the threat of burrow destruction by cattle and goats. They can trample burrows and allow access to predators such as weka, that wouldn't have been able to reach them otherwise.

Little research has been done on disease and parasites in New Zealand seabirds, and there are no diseases recorded to have significance with Westland petrels so far. Avian pox may potentially pose a threat to the petrels, as it has killed a number of black petrel chicks. Other diseases affecting seabirds have been found such as avian cholera in rockhopper penguins (Eudyptes filholi), and avian diphtheria and avian malaria in yellow-eyed penguins (Megadyptes antipodes), none of which have been associated with Westland petrels. 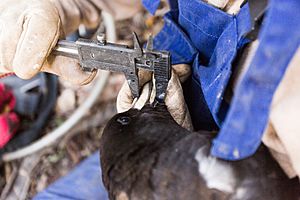 The Westland Petrel was identified in 1945 after the students of Barrytown School wrote to the then Director of the Canterbury Museum, Robert Falla. They had hear in a radio broadcast about the sooty shearwater/muttonbird, but noticed that the behaviour of the 'mutton birds' in their area was quite different. They also sent Falla a dead bird, and within a few weeks he visited the West Coast. Initially he considered that the West Coast birds were a subspecies of the Black Petrel Procellaria parkinsoni, but they were soon classified as a separate species.

Though they have few natural predators, they threatened by human practices. Powerlines, lights, and commercial fishing post a threat to Westland petrel populations. Power lines have caused the deaths of adult petrels from collision during flight. They are dangerous because they attract the birds and cause disorientation, largely in young petrels. This leads to petrels being grounded, which is a significant issue due to the way that Westland petrels must take flight. When the time comes to leave their breeding sites high in the foothills, Westland petrels climb up the tall trees and throw themselves off to fly. With early grounding, oftentimes the birds will perish from starvation, dehydration, predation, or collision with manmade structures. 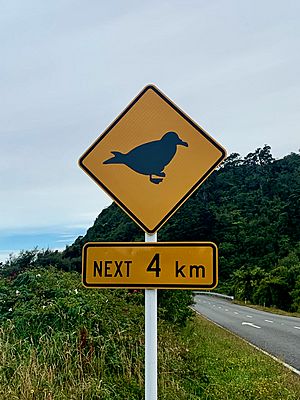 Sign near Punakaiki warning drivers about Westland petrels on the road

Commercial fishing produces competition for food, and sometimes petrels are accidentally captured in fishing nets. This is a prominent risk for Westland petrels due to their tendency to forage from commercial fishery waste, so they are known to interact closely with these vessels.

Westland petrels are interesting in that there is still much that we don't know about the species. Studies are mainly performed during breeding periods due to the petrels’ presence on land, which doesn't fare well for behavioural studies. Very little is known about colonial social behaviours as few studies have been performed. There have been some inquiries about possible vocalisation patterns, but the topic remains largely untouched.

Every year, a festival is held in Punakaiki to celebrate the return of the petrel to its "home". This area is known as the home of the westland petrel, or tāiko (as known by the locals), because it is their only known breeding site. It is a weekend-long festival in April that includes live music, various entertainment activities, and a local market. The festival begins with a viewing of the birds as they fly overhead and make their way to their nests in the mountains at dusk.

All content from Kiddle encyclopedia articles (including the article images and facts) can be freely used under Attribution-ShareAlike license, unless stated otherwise. Cite this article:
Westland petrel Facts for Kids. Kiddle Encyclopedia.