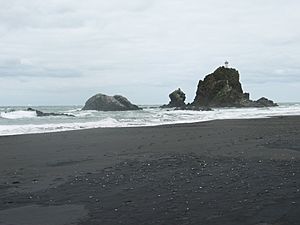 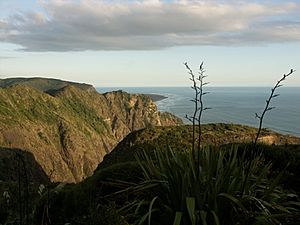 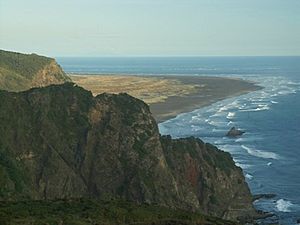 Looking South over Karekare to the Manukau Heads. 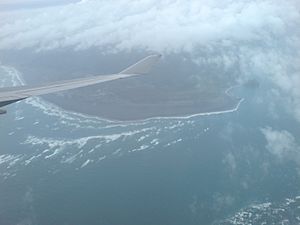 Whatipu from the air, looking east.

Whatipu is a remote beach on the west coast of the Auckland Region in the North Island of New Zealand. The Whatipu area has been managed as a scientific reserve by the Auckland Regional Council since 2002. The road to it is unsealed. To the south of Whatipu is Manukau Harbour. To the north is Karekare. Whatipu is located at the southern end of the Waitākere Ranges. Shifting sands have substantially changed the beach since the 1940s. Over 6 square kilometres has been added to the beach since then.

Whatipu does not have a surf patrol. Swimming may not be safe due to rips, in common with all beaches west of Auckland. HMS Orpheus ran aground just inside the Manukau Harbour entrance south of Whatipu in 1863 with the loss of 189 lives. It was the biggest shipping disaster in New Zealand history.

In pre-European times the area was actively used by Māori, living along the coastline and river valleys. There are caves about 20 minutes walk from the carpark, but there is no access from the caves to the beach. These caves and rock shelters were used as refuges during times of war between the 16th and 18th centuries. Textile remains such as fishing nets, baskets, cloak fragments were collected from four archeological sites in the area in the early 1900s: one at Whatipu and three on Paratutae Island to the south east.

A timber mill was built at Whatipu in 1867 to service the kauri trade. A tramline was built to a second timber mill three kilometers north in 1870, and eventually extended up to Piha and Anawhata. The mills closed in 1886 when the kauri ran out. While the timbermill was open, mill workers used the larger caves in the area were as a popular venue for meetings, and in the early 20th century the largest cave was used for dances, but sand has since drifted into the cave and the dance floor is now covered by five metres of sand.

At 6-hours return, the route for this track begins at the carpark at Whatipu. It leads up the hill to the right of the carpark and is clearly marked. It follows the top of the cliffs to the Pararaha Valley where it descends to the beach at Pararaha point. It then follows the beach back to Whatipu. Paratutae Rock at the harbour entrance is difficult and particularly dangerous to climb down. The Kura-Omanawanui Tracks are the other notable walk out of Whatipu. Follows Kura Track eastwards alongside the stream through bush, then climbs steeply to Puriri Ridge and the Whatipu Road. Back via Omanawanui Track, a switchback ridge in open bush with views across the Manukau Harbour and the Whatipu valley to the west coast. Time 4 hours.

Modern history and in the media

In 2005, the remains of a man who had been missing for four years were found by police at Whatipu's Destruction Gully. It was speculated that the man was the victim of an accident during fishing on the Manukau Harbour. In 2006, the location was featured on Ghost Hunt, a New Zealand paranormal television show. In the 21st century, Whatipu has been used for the Wild Turkey Off-Road Half Marathon/15 km. The Whatipu Beach Beacon is a lighthouse of the area.

All content from Kiddle encyclopedia articles (including the article images and facts) can be freely used under Attribution-ShareAlike license, unless stated otherwise. Cite this article:
Whatipu Facts for Kids. Kiddle Encyclopedia.