Wheatley Place is a neighborhood in south Dallas, Texas, that is designated as a Dallas Landmark District and National Historic District. by the city. Included among the buildings that compose the historic district is the home of Dallas civil rights pioneer, Juanita Craft.

Predominantly constructed as a neighborhood for African Americans, the area was named for Phillis Wheatley, an African-American poet from the 18th century.

The Dallas City Council designated Wheatley Place as a Historic District on 25 October 2000. 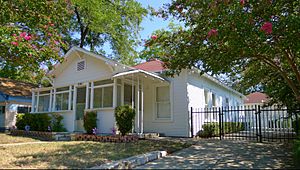 All content from Kiddle encyclopedia articles (including the article images and facts) can be freely used under Attribution-ShareAlike license, unless stated otherwise. Cite this article:
Wheatley Place, Dallas Facts for Kids. Kiddle Encyclopedia.