Where in the World of Music Is Carmen Sandiego? facts for kids 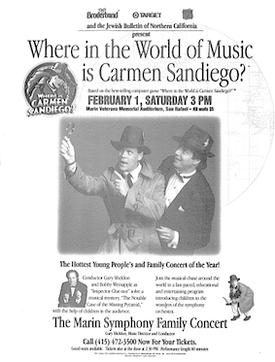 According to Sandpoint, Idaho, a unique installment of the "interactive presentation" concert series entitled The Case of the Missing Planet was performed on Aug. 6 2000, "featuring the Spokane Symphony Orchestra. The premise was: "With the help of children in the audience, Conductor Gary Sheldon and Inspector "Clue-not" discover musical clues from Strauss to Mozart which lead to different parts of the solar system. The performance is both entertaining and educational." In Jacksonville, The Case of the Missing Concert Hall was performed as part of the "Symphony Matinee Series".

The musicals were devised by music director of California's Marin Symphony, Gary Sheldon, who "came up with the idea of combining the Carmen Sandiego format with an orchestra concert". The Spokesman noted "The blend of “Carmen Sandiego” with symphony music fits seamlessly into the formula devised by Stefan Kozinski in 1981."

The Case Of The Missing Concert Hall

The Case of the Missing Bells

The Case of the Missing Pyramid

The Case Of The Missing Concert Hall

According to The Deseret News, Inspector Clue-not "joked and bantered throughout this relatively short...musical mystery tour", which was both pleasant to listen to and varied enough to engage even the youngest audience member - despite some fidgeting during the longer pieces. It added "between the gags was some pretty credible music and solid individual performances. One performance that stood out was Jenifer Larson who sang an operatic "O mino babbiro caro" in her soprano voice, who "certainly hit the high notes and held her own with the orchestra at full volume". The most "inteesrting performance" was a "delicate and hauntingly beautiful" Koto piece called Image of Spring. Kay Qualley, Executive Director of the Oshkosh Symphony Orchestra said "This is an outstanding family performance that will entertain kids and adults with its interactivity and its musicality...Kids know Carmen Sandiego...and they’ll love this performance."

The Case of the Missing Bells

According to Karin Butler, director of operations for the Spokane Symphony, "More than 2,200 students from Coeur d'Alene, Kootenai, Post Falls and Lakeland attended the orchestra's two shows Tuesday at North Idaho College" in early 1999.

The Case of the Missing Pyramid

This "adventure sideline" of the family event Rivers of the World, during the Festival for Families at Sandpoint "kept audience interest alive with Aida". The Festival's Executive Director, Dyno Wahl said: “This year we really beefed up the children’s activities at the family concert”.

All content from Kiddle encyclopedia articles (including the article images and facts) can be freely used under Attribution-ShareAlike license, unless stated otherwise. Cite this article:
Where in the World of Music Is Carmen Sandiego? Facts for Kids. Kiddle Encyclopedia.