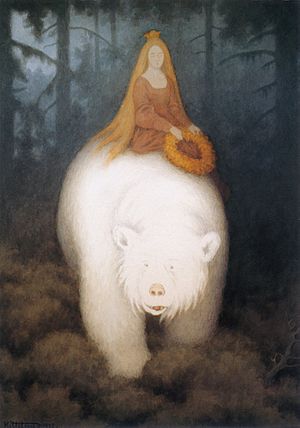 White-Bear-King-Valemon (Kvitebjørn kong Valemon) is a Norwegian fairy tale. The tale was published as No. 90 in Asbjørnsen and Moe's Norske Folke-Eventyr. Ny Samling (1871). George Webbe Dasent translated it for his Tales from the Fjeld.

The familiar version was collected by the artist August Schneider in 1870 from Setesdal. Jørgen Moe collected a variant of the tale Bygland, summarized in the 2nd edition of Norske Folke-Eventyr (1852).

It is Aarne-Thompson type 425A, the search for the lost husband. A similar Norwegian tale that exhibits this motif is East of the Sun and West of the Moon (Asbjørnsen & Moe, No. 41). Others of this type include: The King of Love, The Brown Bear of Norway, The Daughter of the Skies, The Enchanted Pig, The Tale of the Hoodie, Master Semolina, The Enchanted Snake, The Sprig of Rosemary, and The Black Bull of Norroway.

A king had two ugly and mean daughters and one, the youngest, who was beautiful and gentle. She dreamed of a golden wreath. Her father set goldsmiths to make it, but none of them matched her dream. Then she saw a white bear in the woods and it had the wreath. The bear would not give it to her before she agreed to go away with him, and got three days to prepare for the trip. The daughter did not care for anything as long as she had the wreath, and her father was glad of her happiness and thought he could keep off the bear, but when it arrived, it attacked the king's army and defeated them, unscathed. 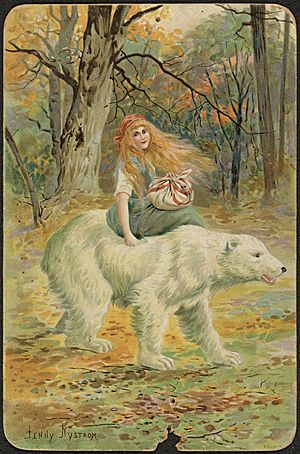 An illustration by Jenny Nyström

The king sent out his oldest daughter. The bear took her on its back and rushed off with her, but asked her if she had ever sat softer or seen clearer, and she said she had, on her mother's lap, and at her father's court; so the white bear brought her back to the castle.

The next Thursday it came again, and the king tried his second daughter, and she also failed. The third Thursday, the king had sent his third daughter, and she had never sat softer or seen clearer, so it took her to its castle. Every night, it turned into a man and came to her bed in the dark.

Every year, the princess had a child, but as soon as the baby was born, the bear rushed away with it. At the end of three years, she asked to visit her parents. There, her mother gave her a candle so that she could see him. At night, she lit it and looked at him, and a drop of tallow fell on his forehead, waking him. He told her that if she had waited another month, he would have been free of an evil witch queen's spell, but now he must go to the witch's realm and become her husband. He rushed off, but she seized his fur and rode him, though the branches battered her, until she was so tired that she fell off. 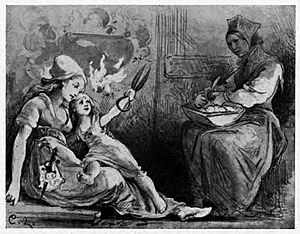 An illustration by Carl Larsson

The princess searched in a forest until she came to a cottage where an old woman and a little girl were. The old woman told her that the bear had gone by; the little girl had a scissors that, whenever she cut in the air, silk and velvet appeared, but she said the woman had more need of it, and gave it to her. She went on to another hut, with another old woman and little girl. This time, the little girl gave her a flask that poured whatever was wished for and never emptied. She went on to a third hut, where the little girl gave her a cloth that could conjure up food. The fourth night, the princess came to a hut where an old woman had many children who cried for food and had no clothing. The princess fed and clothed them, so the old woman had her husband, a smith, make her iron claws so she could climb the mountainside to the witch's country.

The princess reached the witch's castle. She started to clip out cloth. The witch offered to trade for them; the princess insisted on a night with her sweetheart, but the witch agreed but drugged him with a sleeping potion, so that she could not wake him. The next day, she bribed her way in with the flask; again the witch had put him to sleep, but an artisan next door heard her and told the king. The third day, she bribed her way in with the cloth, and the king had not drunk the drink, and they could talk. They come with an idea how to kill the witch.

And so the day arrived when the king was to marry the witch, and witches from various lands came there for this occasion. But the king had carpenters put a hidden trapdoor in a bridge over a deep chasm where the wedding procession would ride, and so the witch-bride fell through it along with all of her bridesmaids. With the forces of evil destroyed, and the curse broken, the king and the princess took the treasures from the witch's castle and then went to his homeland for the real wedding. On the way, they took the little girls, and the princess learned that they were her own daughters, whom the king had taken so they could aid her in her quest.

A Norwegian variant, titled Kong Hvidevallbjørn, was collected from Valdres. The tale was compared to other Animal Bridegroom variants, including an Italian one by Stanislao Prato.

All content from Kiddle encyclopedia articles (including the article images and facts) can be freely used under Attribution-ShareAlike license, unless stated otherwise. Cite this article:
White-Bear-King-Valemon Facts for Kids. Kiddle Encyclopedia.