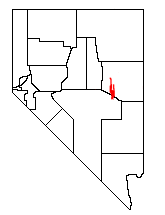 Location of the White Pine Range within Nevada

The White Pine Range is a group of mountains in southern White Pine County, in eastern Nevada. The range runs for approximately 51 miles (82 km) from Beck Pass in the north to Currant Pass in the south. To the west of the range are the Duckwater (Shoshone) tribal lands and the northern arm of large Railroad Valley. To the east are Jakes Valley and the northern part of the long White River Valley. To the south are the Horse and Grant Ranges.

The White Pine Range is a unit of the larger Humboldt-Toiyabe National Forest administered by the US Department of Agriculture's Forest Service. 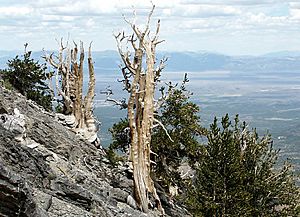 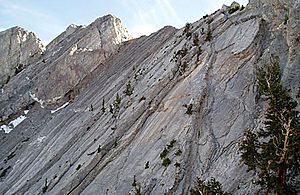 Although named after the Limber Pine, the range might better be known for its large and vigorous stand of Great Basin Bristlecone Pines. Young and old trees alike exist at elevations above 10,000 feet, right up to the summit of Currant Mountain.

All content from Kiddle encyclopedia articles (including the article images and facts) can be freely used under Attribution-ShareAlike license, unless stated otherwise. Cite this article:
White Pine Range Facts for Kids. Kiddle Encyclopedia.