Wicked Twister is an inverted roller coaster located at Cedar Point amusement park in Sandusky, Ohio. Designed by Werner Stengel, it is a second-generation Impulse model manufactured by Intamin. The ride was marketed as the tallest and fastest double-twisting impulse coaster in the world when it opened to the public on May 5, 2002.

Construction on Wicked Twister started on October 15, 2001 when the Stadium Games, formerly the Aquarium, were razed. Wicked Twister was officially announced about a month later on November 20. During its marketing campaign, the ride was billed as the tallest and fastest double-twisting impulse coaster in the world. The first pieces of steel were erected on December 15 and the first piece of track was installed four days later. The first test run occurred on April 2, 2002.

At the beginning of the ride, the linear induction motors propel the train forward out of the station during its first launch at 50 mph (80 km/h), which carries the train approximately halfway up the front tower. After coming to a stop, the train falls and enters the LIM section again, where the train is accelerated during its second launch to 63 mph (101 km/h) in the backward direction so that the train climbs halfway up the rear tower. The train then stops and drops forward before re-entering the LIM section where additional thrust is added as the train gains to 69 mph (111 km/h) during its third launch, causing the train to reach its highest point on the front tower. Stopping and reversing, the train drops and re-enters the LIM section where the LIM launches the train for the fourth time, making the train reach a maximum speed of 72 mph (116 km/h) to travel a maximum of 206 ft (63 m) up the rear tower. With the one more final pass forward through the LIM section, the train goes up the front spike once more before the train reverses. As it travels back toward the station, the brakes are applied and it stops within the station platform. Unlike other Inverted roller coasters, there is no floor in the loading station that drops out underneath the train. Riders must climb into their seats when loading. 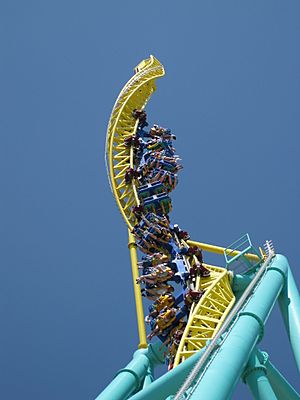 Wicked Twister consists of two 215 feet (66 m) tall spikes. Both ends of the towers (track) are designed with 450-degree vertical twists which is the main difference between Wicked Twister and other Inverted Impulse roller coasters. Between the towers, a horizontal track section incorporates the load and unload area as well as the linear induction motor propulsion system. The ride was built directly on the Cedar Point Beach with its entrance plaza being in the former Aquarium location. The track is painted yellow with teal supports.

The ride features one train that consists of eight cars. Riders are arranged two across in two rows for a total of 32 riders. Wicked Twister's theme song is "The Winner" by the Crystal Method.

All content from Kiddle encyclopedia articles (including the article images and facts) can be freely used under Attribution-ShareAlike license, unless stated otherwise. Cite this article:
Wicked Twister Facts for Kids. Kiddle Encyclopedia.