Possessed is an Inverted Impulse launched roller coaster located at Dorney Park & Wildwater Kingdom in Allentown, Pennsylvania. Manufactured by Intamin and designed by Werner Stengel, the roller coaster originally debuted at Geauga Lake amusement park as Superman: Ultimate Escape on May 5, 2000. After Cedar Fair purchased Geauga Lake in early 2004, the coaster was immediately renamed Steel Venom. The ride closed in 2006 and was moved to Dorney Park. It reopened in 2008 briefly under the name Voodoo, and was renamed Possessed for the 2009 season. The model is identical to five other impulse coaster installations at other amusement parks, and a larger version called Wicked Twister is located at Cedar Point. 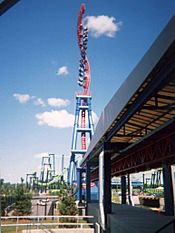 Possessed when it was known as Superman: Ultimate Escape at Geagua Lake (then named Six Flags Ohio and Six Flags Worlds of Adventure).

The ride was built by Six Flags in 2000 where it opened at what had been known as Six Flags Ohio in Aurora, Ohio and was known as Superman: Ultimate Escape.

In March 2004, Six Flags sold Worlds of Adventure (which Six Flags Ohio had been renamed to in 2001) to Cedar Fair for $145 million. Following the sale, the park reverted to its original name, Geauga Lake. All references to Looney Tunes and DC Comics characters had to be removed prior to opening day the same year, since Cedar Fair did not have licensing rights. As a result, they renamed the coaster Steel Venom. It, while receiving new signage featuring a black background with a silver and purple snake, retained its original blue, red, and yellow Superman track.

The coaster was dismantled at the end of the 2006 season and was put into storage after an incident earlier that year. At that point, rumors began to surface that Geauga Lake was going to cut back their offerings or possibly close. At the end of the 2007 season, Cedar Fair announced the amusement park section of the park would close and the park would operate exclusively as Wildwater Kingdom.

The coaster was relocated to Dorney Park and construction began in fall 2007 and was completed in April 2008. According to the staff and management, the coaster was expected to open on opening day of the 2008 season which was May 3, 2008 but it did not. On April 30, Screamscape stated that the opening day will be in mid-to-late-May. Park representatives confirmed this on May 1.

On May 16, 2008, the coaster was given the authorization to open. It had a soft opening the next afternoon. Media day was on May 21, with the grand opening two days later.

In 2009, the name was changed to Possessed in light of the fact that fellow theme park operator Six Flags claimed a trademark on the name "Voodoo." Rather than incur a legal dispute, Cedar Fair Entertainment Company, the owners of Dorney Park & Wildwater Kingdom, had the name changed as part of a marketing gimmick claiming that it was now super-saturated with evil spirits. All memorabilia with the "Voodoo" name was sold at tremendous discounts via the park's website.

The coaster's layout consists of two vertical spikes, one twisted and the other straight vertical with a holding brake, connected by a launch and station tract to form a basic "U" layout. The original ride began with riders being launched forward by the use of linear induction motors. After the initial launch, the train heads up the twisted vertical spike that twists the train 180 degrees. The train then falls and is launched backwards up the vertical spike. It shuttles back and forth three times. On the final full speed launch in reverse the holding brake at the top of the vertical rear spike used to engage, locking the train in place for a very brief moment. The holding brake is no longer operational. Valleyfair's Steel Venom is currently the only Intamin Impulse roller coaster in the United States operating with the holding brake still functional.

The maximum G-force of the ride is 3.7 Gs, expectantly low for a twisted impulse coaster.

All content from Kiddle encyclopedia articles (including the article images and facts) can be freely used under Attribution-ShareAlike license, unless stated otherwise. Cite this article:
Possessed (roller coaster) Facts for Kids. Kiddle Encyclopedia.