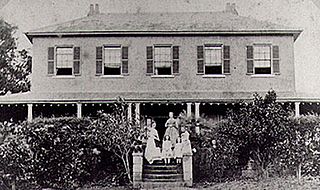 Willandra, Ryde at the time it was occupied by the Devlin family circa 1870

Willandra is a Colonial Georgian house in the Sydney suburb of Ryde. It is listed by the New South Wales Heritage Council as a place of historical significance. It was built by James Devlin in the early 1840s and has been associated with several prominent people. During the 1970s it was in danger of being demolished but it was purchased by the Ryde City Council with the assistance of the Federal Government and has been restored. It is now used by two local community groups. 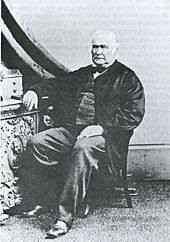 James Devlin was born in 1808 in Sydney. His father was Arthur Devlin, an Irishman who was a leader in the 1798 Rebellion and was captured and exiled to Australia in 1805. His mother was Priscilla Squire, the daughter of James Squire, who was a brewer near Ryde. James’s father died when he was only 12 and his mother remarried. His stepfather was Thomas Small. At the age of 14, James became an apprentice wheelwright and remained in this trade for much of his life. In 1831 he married Mary Ann Hartigan and the following year they had a son James (see photo below). In 1833 Mary died in childbirth and the baby, John, died the following day.

In 1834 James married Susannah Hughes (1810–1906), who was the daughter of Matthew Hughes and Mary Small. Matthew was a schoolmaster first in Sydney and later at Richmond in the Hawkesbury region. James and Susannah had ten children, some of whom are shown in the photos below. James became a relatively influential businessman in the Ryde area and was warden and trustee of St Anne’s Church for many years. His daughter Rebecca Fitzhardinge (see photo below) remembers that part of James business involved the supply of food to several public institutions such as the Orphan School at Parramatta. He also had an orange orchard near Willandra, which was a commercial venture that provided the family with another source of income. The orange orchid is mentioned in some of the advertisements for the sale or lease of Willandra in later years (see below).

In 1841 the Devlins started to build Willandra and by 1845 the family had moved in. Rebecca Fitzhardinge born in 1846 states that she was the first child born in the house. Shortly before they occupied the property James became bankrupt but was released from insolvency in the following year.

The Devlin family lived at Willandra for almost 30 years. The picture above of the house shows some of the family in about 1870 shortly before they left Ryde. In 1874 the Devlins sold the house and moved to Wagga Wagga, New South Wales. According to Rebecca Fitzhardinge, it was first sold to Mrs Jane Darvall and she in turn sold it to Mr John Donald Macansh. He then sold the property to the trustees of Mrs Caroline Manning. (see below). An advertisement for the sale of the house appeared in the Sydney Morning Herald in 1875. At this stage it was referred to as Ryde House and was described in the following terms:

"Ryde House, Kissing Point, for private sale. That commodious family mansion containing hall, 12 rooms, kitchen, laundry and every possible convenience; magnificent garden, orchard, orangery, gardener’s house etc. Abundant supply of the very purest water and in one of the healthiest positions in the colony commanding the most extensive and beautiful view, interrupted only by the grand background of the different mountains."

James Devlin died shortly after he moved to Wagga in 1875. His wife Susannah lived for another 32 years and died at the age of 98 years in 1907. When she died, an obituary was written in the Sydney Morning Herald outlining details of her life and stating that she had at that time 42 living grandchildren

The Devlin family name has been preserved in the name of Devlins Creek, a tributary of the Lane Cove River, and Devlin Street. 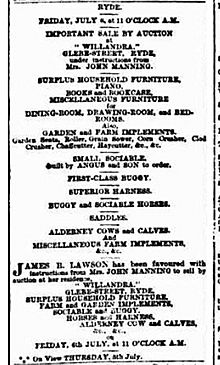 Caroline Manning owned Willandra from 1879 until her death in 1921 but she resided at the house only until 1894. Caroline was born Caroline Elizabeth Mary Suttor in 1841 in New South Wales and was the daughter of William Henry Suttor and Charlotte Augusta Ann Francis. Suttor was a wealthy pastoralist and politician who owned the property Brucedale in Bathurst, New South Wales, where Caroline spent her childhood. Caroline’s father died in 1877 and in accordance with his will Willandra was bought for her and held for her in trust.

Caroline and John were married in 1859 and had thirteen children, six boys and seven girls. Their fourth child, Reginald Kerr Manning, travelled up river to school at Newington College when it was at Newington House on the Parramatta River at Silverwater.

In 1894 John Edye Manning was involved in a sensational divorce case where he was named as the co-respondent. He was found guilty and was ordered by the Court to pay 2000 pounds. The case was reported widely in the newspapers in March 1894 and two months later Caroline advertised Willandra as a house to be let. The advertisement read as follows.

“To let, Willandra, the Residence of Mrs Manning, furnished or unfurnished a most comfortable family residence, overlooking the Parramatta River within a mile of the railway and steamer. Contains 18 lofty and spacious rooms, outoffices, stables etc. Water and gas laid on. Tennis lawns, fruit and flower gardens.

This advertisement with the mention of “Willandra” indicates that it was the Mannings who chose the name Willandra for the house, since the For Sale notice by James Devlin in 1874 (see above) referred to the residence as “Ryde House”. Shortly after she advertised the house to be let, she placed an ad for the sale of the contents of Willandra. The advertisement is shown in the picture on the right.

Some time after Willandra had been let, the family left Australia for England. The United Kingdom Census of 1901 shows that John and Caroline and their five youngest children were living at 28 London Road, Reigate, a market town in Surrey. John Edye Manning died at Reigate in 1909 and Caroline died twelve years later in 1921 in Kensington aged 79 years 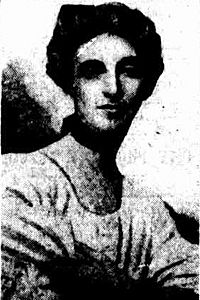 Miss Ellen Pye, Principal of the school at Willandra from 1894 to 1899

Ellen Pye rented Willandra from Caroline Manning from 1894 to 1899. The house became a Boarding and Day School for Girls called Rydalmount. The advertisement for the school (shown in picture below) appeared in the Sydney Morning Herald in June 1894 and gave a colourful description of Willandra as follows:

“The house is situated on a magnificent site of 30 acres, 200 feet above the sea level and commands extensive and picturespue views, embracing a wide and beautiful sweep of the Parramatta River. There are spacious playgrounds, ornamental gardens, and a lawn tennis court, a large orchard and vineyard. The rooms are lofty and well ventilated, thoroughly adapted for school purposes.

Ellen Blundell Pye was born in 1860 in Lathom, a small village in Lancashire, England. Her parents were Edward and Ellen Pye. and they owned a farm in the village. She was part of a large family of six children, two boys and four girls. When Ellen was still a child her father died and the family moved to North Meols where her mother ran a boarding house. In 1883 at the age of 22 Ellen immigrated to Australia with her mother and some of her siblings on the ship Orient.

Advertisement placed by Miss Ellen Pye for the school at Willandra in June 1894.

By 1890 Ellen had become Principal of St Anne’s School in Ryde. and in 1894 she decided to run her own school at Willandra. The Sydney Morning Herald in October of that year gives a brief description of a fete organised by the pupils at Miss Pye’s school Willandra, Ryde in aid of the Children’s Hospital. The newspaper says that there were “stalls for fancy work and toys, refreshments, flowers and bouquets.” The article also lists the young ladies who were pupils at the school.

Ellen ran the school at Willandra until 1899 at which time she moved to Victoria to become Principal of Toorak College. She remained there until 1907 but due to ill health she retired. Some time later she returned to England and lived in Wimbledon for many years. She died there in 1948 at the age of 88 years.

All content from Kiddle encyclopedia articles (including the article images and facts) can be freely used under Attribution-ShareAlike license, unless stated otherwise. Cite this article:
Willandra, Ryde Facts for Kids. Kiddle Encyclopedia.