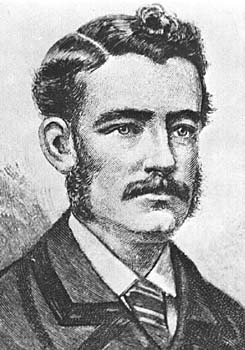 William Christie Gosse (1842–12 August 1881) was an explorer. He was born in Hertfordshire, England. He moved to Adelaide, Australia with his father in 1850. Gosse was one of the first Europeans to explore central Australia. He spotted Uluru on 19 July 1873 and named it Ayers Rock after Sir Henry Ayers, the Chief Secretary of South Australia. Gosse was not the only explorer in the region at the time. Due to the construction of the Overland telegraph Line, the area was opened up to exploring, and Ernest Giles was also looking for a path to the West. Giles failed on his first attempt and Gosse succeeded by following Giles original track.

All content from Kiddle encyclopedia articles (including the article images and facts) can be freely used under Attribution-ShareAlike license, unless stated otherwise. Cite this article:
William Gosse Facts for Kids. Kiddle Encyclopedia.