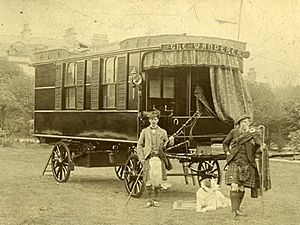 Stables (right) with his dog "Hurrican Bob" at his side, and an unknown person (left), with his caravan "The Wanderer", in the 1890s

William Gordon Stables (21 May 1840 – 10 May 1910) was a Scottish-born medical doctor in the Royal Navy and a prolific author of adventure fiction, primarily for boys.

William Gordon Stables was born in Aberchirder, in Banffshire (now part of Aberdeenshire). After studying medicine at the University of Aberdeen, he served as a surgeon in the Royal Navy. He came ashore in 1875, and settled in Twyford, Berkshire, in England.

He wrote over 130 books. The bulk of his large output is boys' adventure fiction, often with a nautical or historical setting. He also wrote books on health, fitness and medical subjects, and the keeping of cats and dogs. He was a copious contributor of articles and stories to the Boy's Own Paper.

Stables has been regarded as one of the most prominent of the English imitators of Jules Verne, especially in his novels of polar adventure, like The Cruise of the Snowbird (1882), Wild Adventures Round the Pole (1883), From Pole to Pole (1886), and "his most ambitious novel," The Cruise of the Crystal Boat (1891).

He is also notable as the first person to order a "gentleman’s caravan" from the Bristol Wagon & Carriage Works, in which he travelled the length of Great Britain in 1885 (the subject of his book The Gentleman Gypsy).

Stables married Theresa "Lizzie" McCormack on 15 July 1874 and they had four sons and two daughters. He died in at his home in Twyford, Berkshire on 10 May 1910 from tuberculosis. 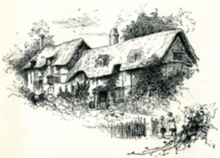 A Souvenir of the "Wanderer" Caravan, Book Illustration

All content from Kiddle encyclopedia articles (including the article images and facts) can be freely used under Attribution-ShareAlike license, unless stated otherwise. Cite this article:
William Gordon Stables Facts for Kids. Kiddle Encyclopedia.