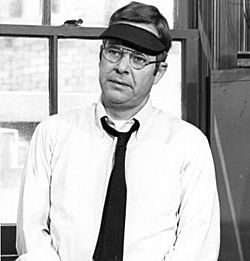 Windom in My World and Welcome to It

William Windom (September 28, 1923 – August 16, 2012) was an American movie, radio, stage, voice, and mostly television actor who's career has lasted for 56 years. Windom is mostly known for his roles in popular television series such as; Matt Decker in Star Trek, as Dr. Seth Hazlitt in Murder, She Wrote, Glen Morley in The Twilight Zone, and is also known for his voice as Puppetino in Pinocchio and the Emperor of the Night.

Windom died on August 16, 2012 from congestive heart failure in his home in Woodacre, California, he was 88 years old.

All content from Kiddle encyclopedia articles (including the article images and facts) can be freely used under Attribution-ShareAlike license, unless stated otherwise. Cite this article:
William Windom (actor) Facts for Kids. Kiddle Encyclopedia.