Wind power in the United States facts for kids 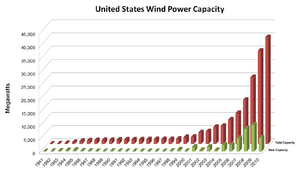 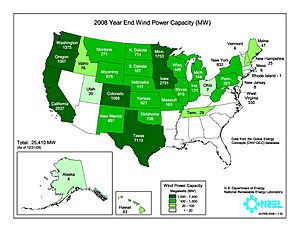 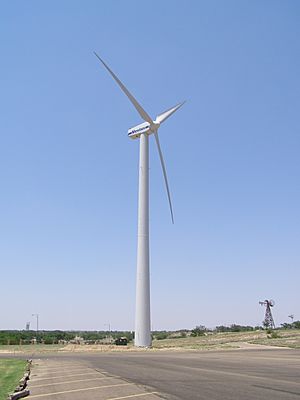 Driven by state renewable energy mandates, fourteen states have installed over 1,000 MW of wind capacity, and a total of 37 states now have installed at least some large-scale wind power. Texas, with 10,135 MW of capacity, has the most installed wind power capacity of any U.S. state, followed by Iowa with 3,675 MW. The Roscoe Wind Farm (781 MW) in Texas is the largest wind farm in the US as of 2011.

The U.S. wind industry generates tens of thousands of jobs and billions of dollars. Wind projects boost local tax bases, and help the economy of rural communities by providing a steady income stream to farmers with wind turbines on their land. GE Energy is the largest domestic wind turbine manufacturer.

All content from Kiddle encyclopedia articles (including the article images and facts) can be freely used under Attribution-ShareAlike license, unless stated otherwise. Cite this article:
Wind power in the United States Facts for Kids. Kiddle Encyclopedia.