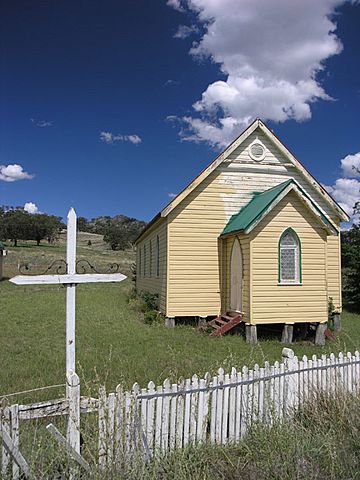 Wingen is a village in the Upper Hunter Shire, in the Hunter Region of New South Wales, Australia. Situated on the New England Highway, it lies about 15 minutes from the town of Scone. It is known for the local "Burning Mountain" tourist attraction, a burning underground coal seam. Wingen has a population of just several hundred people.

Its few businesses include an antique store and a pub.

The town is known for the "Burning Mountain", which according to scientists is the world's oldest known coal fire, and has been burning for approximately 6,000 years. Explorers in the 19th century mistook its smoking summit for a volcano. In fact the name Wingen comes from the local Aboriginal language, and means "fire".

The "Wingen Maid" is a rock formation in the local Wingen Maid Nature Reserve which resembles a woman when viewed from a particular direction.

A now-demolished railway station on the Main North railway line operated between 1871 and 1975.

All content from Kiddle encyclopedia articles (including the article images and facts) can be freely used under Attribution-ShareAlike license, unless stated otherwise. Cite this article:
Wingen, New South Wales Facts for Kids. Kiddle Encyclopedia.