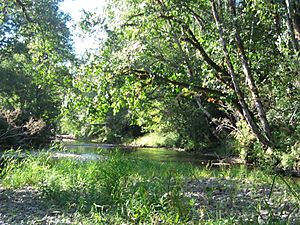 The Wishkah River near Hoquiam, Washington.

The Wishkah River is a tributary of the Chehalis River in the U.S. state of Washington. Approximately 40 miles (64 km) long, the river drains a remote rural area of approximately 102 square miles (260 km2) in Grays Harbor County along the Washington coast north of Aberdeen. It flows south through the county and empties into the Chehalis at Aberdeen.

The name "Wishkah" is an adaptation of the Chehalis Indian word hwish-kahl, meaning "stinking water".

The Nirvana song "Something in the Way" refers to the experiences of lead singer Kurt Cobain while living under a bridge on the river after dropping out of high school and being kicked out of his mother's home. According to his biographer Charles R. Cross, however, this was largely a myth created by Cobain himself. One third of his cremated remains were scattered in the river after his death.

From the Muddy Banks of the Wishkah is a live album compiled by the band. It was released on October 1, 1996, two and a half years after Cobain's death, and features live performances recorded from 1989 to 1994.

All content from Kiddle encyclopedia articles (including the article images and facts) can be freely used under Attribution-ShareAlike license, unless stated otherwise. Cite this article:
Wishkah River Facts for Kids. Kiddle Encyclopedia.