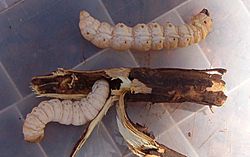 A couple of witchetty grubs.

A witchetty grub (also spelled witchety grub or witjuti grub) is the large, white larva of a moth. It is a name used in Australia. Normally, it refers to the larvae of the cossid moth Endoxyla leucomochla, found in central Australia. These moths eat the roots of the witchetty bush (a plant named after the grubs). It is also sometimes used to refer to the larvae of other cossid moths, as well as those of ghost moths (Hepialidae). It is used mainly when the larvae are being thought of as food. Because it contains a lot of protein, the grub is the most important insect food of the desert. It was a staple in the diets of nomadic Aboriginal people living in the outback.

All content from Kiddle encyclopedia articles (including the article images and facts) can be freely used under Attribution-ShareAlike license, unless stated otherwise. Cite this article:
Witchetty grub Facts for Kids. Kiddle Encyclopedia.