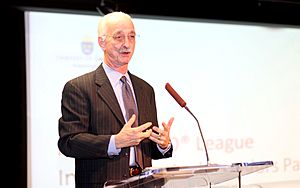 Flowers speaking at the Embassy of Sweden in Washington, D.C.

Woodie Claude Flowers (November 18, 1943 – October 11, 2019) was a professor of mechanical engineering at the Massachusetts Institute of Technology. He worked on engineering design and product development. He also held the Pappalardo Professorship and was a MacVicar Faculty Fellow.

Flowers was born in Jena, Louisiana on November 18, 1943. He was named after his grandfathers Woodie and Claude. His father, Abe Flowers, was a welder and inventor. His mother, Bertie Graham, was an elementary-school and special education teacher. As a boy, he showed mechanical aptitude like his father, Abe, and he earned the rank of Eagle Scout. When he was seventeen, he and four friends were driving on Louisiana Highway 127 when they were hit head-on by another vehicle that was traveling at about 100 miles per hour (160 km/h). The accident killed two people in Flowers' vehicle and one in the other. It made him believe what he called "genetic opposition to violence" and created his "fierce, vocal loathing of any spectacle that involves crashing pieces of machinery into each other with deliberate force."

Flowers went to Louisiana Polytechnic Institute and graduated with his B.S. in 1966. He then went to Massachusetts Institute of Technology (MIT), earning his M.S. (1968), M.E. (1971), and Ph.D. (1973) under the direction of Bob Mann. His thesis, called "A man-interactive simulator system for above-knee prosthetics studies," was on a robot-like prosthetic knee inspired by Mann's Boston Arm.

After receiving his doctorate (Ph.D.), Flowers began as an assistant professor at MIT. He worked with Herb Richardson on the "Introduction to Design and Manufacturing" class. Known by its course number as 2.70 (now 2.007), the class had a design competition to build robotic devices to accomplish a challenge. Flowers took over the class in 1974, changing it into one of the most popular classes at MIT. He changed the challenge every year, always trying to make it more complex and exciting. The competition was shown on TV several years on the PBS show Discover the World of Science. The competition became like a sporting event, and was even jokingly referred to as MIT's true homecoming game. In 1987, Flowers handed the class over to Harry West.

Discover the World of Science changed its name to Scientific American Frontiers in 1990, and Flowers served as its host until 1993 when he was replaced by Alan Alda. In 1990, Flowers began working with Dean Kamen on FIRST (For Inspiration and Recognition of Science and Technology), a project to promote science and technology. Taking parts from 2.70, they created the FIRST Robotics Competition (FRC) in 1992. Flowers brought the phrase "gracious professionalism" to FIRST, an idea which has since become very important in FIRST rules and culture. Flowers served every year as National Advisor to FIRST. He was active at FIRST events, working as an MC and treated along with Kamen "like heroes."

At the 2017 VEX Robotics World Championship, Woodie Flowers was inducted into the STEM Hall of Fame.

Flowers was a "Distinguished Partner" at Olin College, a member of the National Academy of Engineering, and a Fellow of the American Association for the Advancement of Science. In 2007, he received a degree honoris causa from Chilean university Universidad Nacional Andrés Bello. He died on October 11, 2019, in Massachusetts following complications from aorta surgery.

All content from Kiddle encyclopedia articles (including the article images and facts) can be freely used under Attribution-ShareAlike license, unless stated otherwise. Cite this article:
Woodie Flowers Facts for Kids. Kiddle Encyclopedia.