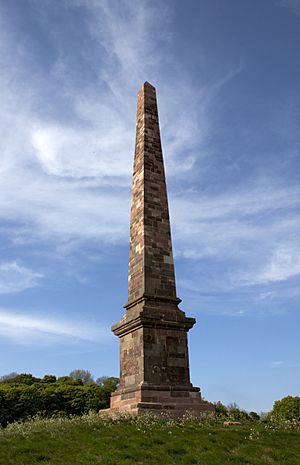 The Hagley Obelisk on Wychbury Hill

The Hagley Obelisk (also known as the Wychbury Obelisk and locally as Wychbury Monument) stands close to the summit of Wychbury Hill in Hagley, Worcestershire, and is only about 150 metres from the border of the West Midlands.

The obelisk is a Grade II* listed building. It is 84 feet (26 m) high, and can be seen for many miles around, as far as away as Shropshire, and the hill if not the monument on its summit from the Malverns. It was commissioned as a family memorial and completed in 1758 at the same time as Hagley Park was being redeveloped in the fashionable neoclassical style.

There was much debate for decades over whether the eventually disintegrating structure should be demolished for safety reasons, but the consensus was that time and weather should be allowed to do the job until its restoration could be funded. It was formerly on the English Heritage list of the most endangered listed buildings until in 2010 conservation work was begun to repair it with funding aid from Natural England's Higher Level Stewardship scheme and Viscount Cobham. This involved it being largely deconstructed and rebuilt. By 2011 the obelisk had been fully restored.

Since at least the 1970s the obelisk has been sporadically defaced with graffiti asking "Who put Bella in the Wych Elm?", a reference to an unsolved World War II-era mystery in which the decomposed body of a woman was found in a nearby wood.

All content from Kiddle encyclopedia articles (including the article images and facts) can be freely used under Attribution-ShareAlike license, unless stated otherwise. Cite this article:
Wychbury Obelisk Facts for Kids. Kiddle Encyclopedia.