Wyoming Village Historic District is a national historic district located at the Village of Wyoming in Wyoming County, New York. The district covers about 45 acres (180,000 m2) and is organized as a New England village around a small triangular village green. The T-shaped district includes approximately 72 historic registered structures along two principal streets, Main and Academy Streets.

According to the National Register of Historic Places, classes of historic significance include Architecture, Education, Social/Humanitarian and Town Planning. Of interest in architectural classification are: Greek Revival, Victorian, Colonial Revival, Gothic, and French Provincial. The district's NRHP Reference Number is 74001326.

The majority of the houses in the historic district date from the second quarter of the 19th century and were mostly built by small tradesman, merchants and retired farmers. The two rows of century-old maples that line Maple Street stand among the simple frame houses.

The district's dominant structures are the Presbyterian Church (1830), Fire Tower (1902), Wyoming Inn (1838), Bryant Fleming House (1910) and Village Hall (1902). The historic Middlebury Academy has been listed separately on the National Register of Historic Places since 1974. 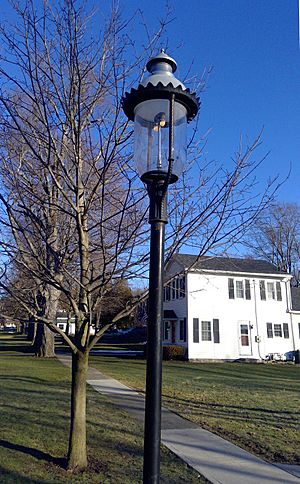 Historic gaslight in the Village of Wyoming, New York.

The district boundaries are drawn to include the heart of the community where the 1838 Wyoming Inn (#1 S. Academy Street), the turn-of-the century bank (#5 S. Academy) a series of stores, the village "Fire Tower" (#10 Tower Road) and the Presbyterian Church (#1 N. Academy St.) are clustered around the triangular green.

The village nickname is "The Gaslight Village" because it is lit day and night by 30 gas lamps which use natural gas drawn from near-by shallow gas pockets under a 99-year contract.

Houses in the district show Federal influence and are generally two-story frame buildings with center doorway, five bays wide on the front facade and usually one bay wide on the sides. The notable examples of this style are:

The most dominant building on the village green is the Presbyterian Church. This steepled, white church is a western New York State adaptation of the New England Church-on-the-Green. A large frame building, it was completed in 1830 and has some Federal features (simple front door and fanlight) as well as some later influences (the narrow paired windows lighting the nave). The interior was remodeled in 1852 and the spire rebuilt in 1870.

The 1817 Middlebury Academy (listed separately on the National Register) is known for its monumental Greek Revival portico which was probably added several years later. Some federal style exists in other elements.

Two other buildings in the district have prominent Greek Revival characteristics: 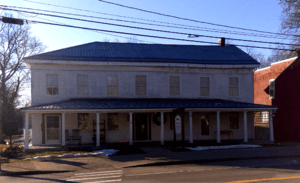 The Wyoming Inn built in 1838 is located at #1 S. Academy Street. It is still operating as a bed and breakfast hotel and community restaurant.

Some of the unusual structures dating from its mid-19th century period of growth in the village of Wyoming include: 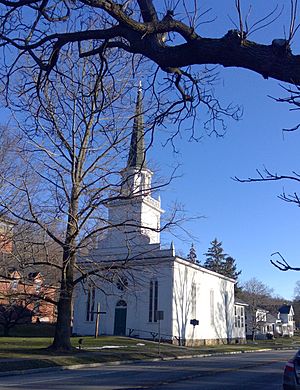 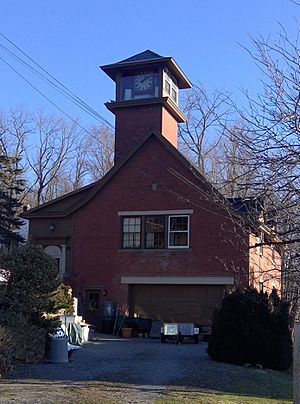 The Fire Tower (1902) in the Wyoming Village Historic District.

Within the Wyoming Village Historic District: