The Yale Bridge or Lewis River Bridge spans the Lewis River near Yale, Washington. It was built in 1932 by Cowlitz and Clark counties. The suspension bridge has a clear span of 300 feet (91 m), with a total length of 532 feet (162 m), replacing a previous steel truss bridge at the site. Construction of the Ariel Dam had created Lake Merwin with a water depth of 90 feet (27 m) at the site, requiring a new bridge that did not need to have support piers in the water. The road deck, stiffened by a steel Warren truss, is 50 feet (15 m) above the high water line of the reservoir.

The bridge was designed by Harold H. Gilbert of the Washington State Highway Department, and was constructed by the Gilpin Construction Company of Portland, Oregon. The only short-span steel suspension bridge in Washington, the bridge incorporates unique features. Only the central span is slung from the cables, with separate unloaded cables acting as backstays running from the 88.75-foot (27.05 m) tall towers to concrete anchorages in the canyon's rocky sides. The approach spans were originally supported from below by a timber structure. The cables are discontinuous at the towers, unlike most suspension bridges in which the cables run over a saddle on the towers. With less wear, the cables could be smaller. The bridge deck is made of timbers with an asphalt overlay. The counties transferred the bridge to the Washington State Department of Highways in the late 1930s and it was refitted in 1957-58 with steel approach spans. It is noted for prominent brackets supporting osprey nests.

The bridge was placed on the National Register of Historic Places on July 16, 1982. 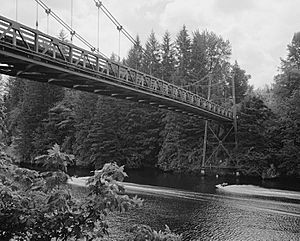 All content from Kiddle encyclopedia articles (including the article images and facts) can be freely used under Attribution-ShareAlike license, unless stated otherwise. Cite this article:
Yale Bridge Facts for Kids. Kiddle Encyclopedia.