The yellow thornbill (Acanthiza nana), formerly known as the little thornbill, is a tiny passerine bird endemic to the eastern coast of Australia. While currently listed as Least Concern by the IUCN, the general consensus is that the population is decreasing. 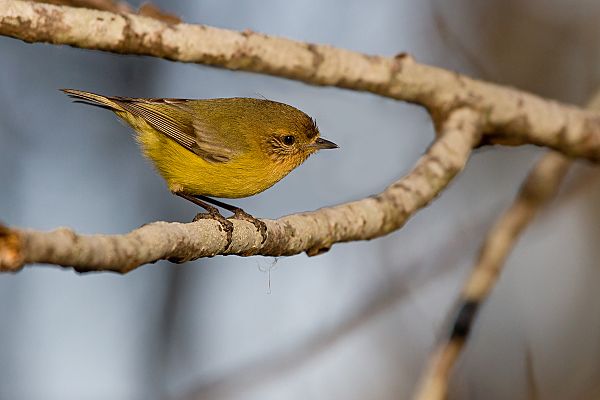 Although similar to the striated thornbill and brown thornbill in both size and shape, the yellow colour of the yellow thornbill is more prominent. There is no sexual dimorphism, so that males and females look alike. They are around 9 cm (3.5 in) in length, with an average wing span of 14 cm (5.5 in), and weighing between 6–7 g (0.21–0.25 oz).

The back feathers are greenish, the primary and secondary wing coverts are olive-brown with a paler edge on the primaries that contrast with the alula. Upper- and under-tail are more dull than the rest of the body, and the same colour as the wings except for a dark brown-black subterminal band. Their throat and chin is a pale buff-orange that blends into the soft, creamy-yellow of the breast. Legs, toes, and bill are all black. Their eyes are dark brown with a grey outer-ring, although in some individuals the outer ring of the iris is almost white or pale brown. The eye-ring is narrow and cream in colour. The lores are also cream, with a slight grey tone. Belly is yellow, fading to a pale olive on the flanks. The head and ear coverts are olive-grey, with white streaking over the eyes and ear coverts.

Juveniles appear similar to adults, though feathers are "softer" looking and duller by comparison . When recently fledged, their gape is still yellow. The yellow feathers on their belly are more subdued, and back and head feathers are more brown than olive. 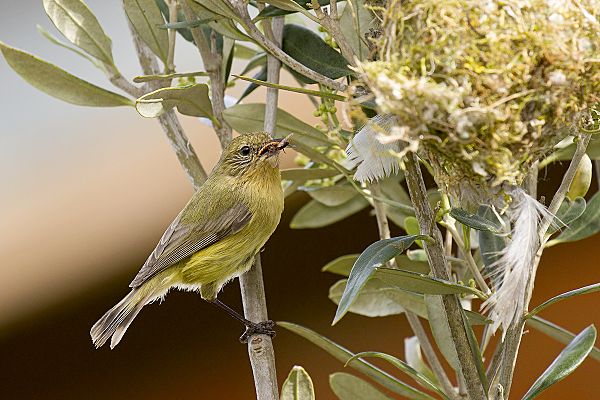 The yellow thornbill likely breed in solitary pairs, but in some areas, evidence of co-operative breeding has been found. Yellow thornbill nests are rounded and domed, with a small entrance near the top. Nests are usually made of bark-fibre and grasses matted together with spider-web, located in the upper foliage of shrubs and small trees. Clutches of two to four eggs are laid soon after the nest has been completed, and are incubated for 16–17 days.

The yellow thornbill has a loud, two-note tzid-id call, notably different from calls of the closely related striated thornbill by its harsher, less insect-like sound. The call is repeated at various intervals throughout the day and is associated with contact between birds while foraging, as defence, or as a territorial advertisement.

Occasionally, yellow thornbills have been observed in feeding flocks of up to 35 individuals, as well as mixed-species feeding flocks. More commonly, however, they are found in smaller groups or pairs. They prefer the upper and middle levels of forest canopy, and can be found moving rapidly through the outer foliage searching for food, or looking under bark. Their diet consists mostly of insects, but they will sometimes eat seeds. They will also catch insects mid-flight.

Yellow thornbills are found mainly within temperate and semi-arid areas, with their range just extending into the subtropical zone. Within these zones, yellow thornbills are found in a variety of habitats including shrublands, forests and thickets, preferring vegetation dominated by casuarinas or eucalypts, particularly in areas with a drier climate. Their range extends from northern and central west Queensland, south along the eastern coast of Australia through much of New South Wales, throughout Victoria and the Australian Capital Territory, and into the southeastern corner of South Australia.

Their current status according to the IUCN Red List is Least Concern, but with a decreasing population. In developed areas such as towns or industrial sectors, the yellow thornbill has only been recorded in older development areas and not at all in more recently developed areas. This correlates with observations of general bird populations in residential zones, with native birds decreasing when the native vegetation is removed. Fire also affects population numbers, with only the oldest age-class present after fires. In farmland which undergoes regular harvesting, yellow thornbills have not been recorded. Fire, land development, agricultural insecticides and climate change have also led to a decrease in insect populations, which for a largely-insectivorous bird could potentially hold severe complications in the future.

All content from Kiddle encyclopedia articles (including the article images and facts) can be freely used under Attribution-ShareAlike license, unless stated otherwise. Cite this article:
Yellow thornbill Facts for Kids. Kiddle Encyclopedia.