Yumbarra Conservation Park, formerly the Yumbarra National Park, is a protected area in the Australian state of South Australia located about 55 kilometres (34 miles) north of the town centre of Ceduna.

To the north it borders Yellabinna Regional Reserve; to the east, Pureba Conservation Park. The conservation park is outside the dog fence, which borders it in the south. Thus, it is situated in the area where dingoes are tolerated. Other animals in the conservation park include southern hairy-nosed wombats, malleefowls, sandhill dunnarts and kangaroos.

The name 'Yumbarra' comes from a protruding rock hole in the area. When it rains, the rock fills with water, turning into a temporary water hole for the conservation park's wildlife. This particular feature of the rock makes it an important site for birds, and thus bird watching.

The arid landscape is characterized by rolling sand dunes. The Googs Track, a 120 kilometres (75 miles) long four-wheel drive road, goes through the conservation park heading to the Yellabinna Regional Reserve in the north towards Googs Lake. A few walking trails follow the Googs Track.

A co-management agreement signed by the Far West Coast Aboriginal Corporation and the Government of South Australia in 2013 in respect to the Yumbarra Conservation Park provides for the corporation to give advice on the management of the conservation park and other reserves in the west of the state. 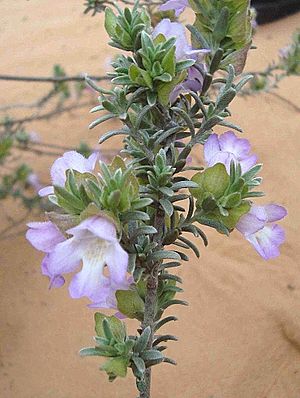 The conservation park is classified as an IUCN IUCN Category VI protected area.

All content from Kiddle encyclopedia articles (including the article images and facts) can be freely used under Attribution-ShareAlike license, unless stated otherwise. Cite this article:
Yumbarra Conservation Park Facts for Kids. Kiddle Encyclopedia.