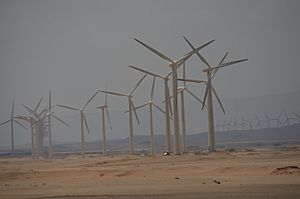 Zaafarana wind farm is a wind power plant located in Ras Gharib, which belongs to the Red Sea Governorate. It is one of the first farms to be established to produce wind energy in Egypt, with an area of ​​120 square kilometres, and produces a third of what the High Dam produces, and was established in 8 phases starting from 2000 until 2010, and is the second largest farm in East Africa after Gabel El Zeit Wind farm, that produces 580 MW.

Al-Zafarana farm for producing electricity from wind energy has 700 turbines, and it produces energy in different quantities. The construction of the Zaafarana station was funded with soft loans from Denmark, Spain, Japan, and Germany, and it was built at a cost of 110 million euros, and the station is entirely affiliated with the New and Renewable Energy Authority.

All content from Kiddle encyclopedia articles (including the article images and facts) can be freely used under Attribution-ShareAlike license, unless stated otherwise. Cite this article:
Zafarana wind farm Facts for Kids. Kiddle Encyclopedia.