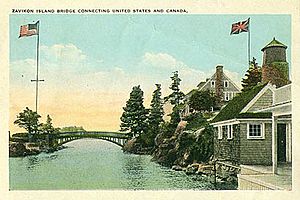 Zavikon Island refers to either the larger or the pair of islands in the Thousand Islands archipelago on the St. Lawrence River between New York and Ontario, two kilometres southeast of Rockport, Ontario and about 200 metres (660 ft) north of the international boundary. As confirmed by the Canadian Department of Natural Resources, Zavikon Island is located in Canadian territory and is part of the township of Leeds and the Thousand Islands in The United Counties of Leeds and Grenville.

The smaller and more southeasterly of the pair of islands is sometimes called Little Zavikon Island. It has a US-Canada Boundary Commission reference monument, from which, along with other reference monuments on the shore and islands, surveying measurement are used to calculate the international boundary line turning points in the waterway (in this case, about 140 metres [460 ft] southeast of the southern tip of Little Zavikon Island as shown on the largest scale USGS map of the area).

A popular but incorrect tale among local guides is that the larger island is in Canada, while "Little Zavikon Island" is in the United States, and the footbridge between them is the "shortest international bridge in the world".

All content from Kiddle encyclopedia articles (including the article images and facts) can be freely used under Attribution-ShareAlike license, unless stated otherwise. Cite this article:
Zavikon Island Facts for Kids. Kiddle Encyclopedia.