Zionsville is a suburban town located in the extreme southeast area of Boone County, Indiana, United States, in Eagle Township, northwest of Indianapolis. The population was 14,160 at the 2010 census, and grew to 26,296 in the Census 2015 estimates.

Zionsville promotes itself as a tourist attraction around its village-styled downtown area. This area primarily consists of Main Street, paved entirely in brick, which is lined with small stores and restaurants. 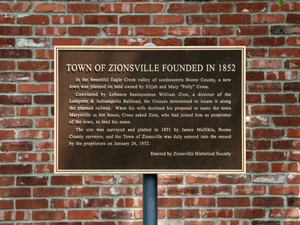 Historical marker near the corner of Main and Cedar streets.

Zionsville was laid out in 1852 when the railroad was extended to that point. It was named for William Zion, a pioneer settler.

Abraham Lincoln made a whistle-stop speech in Zionsville in 1861 when traveling to his inauguration.

Town Hall (Castle Hall) was listed on the National Register of Historic Places in 1983.

The climate in this area is characterized by hot, humid summers and cold winters. According to the Köppen Climate Classification system, Zionsville has a humid continental climate, abbreviated "Dfa" on climate maps. Its inclusion in this climatic type is because of its four distinct seasons, large ranges between high summer temperatures and low winter temperatures, and enough precipitation for it to not be considered arid or semi-arid.

There were 5,129 households of which 44.1% had children under the age of 18 living with them, 66.9% were married couples living together, 6.5% had a female householder with no husband present, 2.1% had a male householder with no wife present, and 24.5% were non-families. 22.0% of all households were made up of individuals and 8.8% had someone living alone who was 65 years of age or older. The average household size was 2.75 and the average family size was 3.25.

There were 3,063 households out of which 45.5% had children under the age of 18 living with them, 70.5% were married couples living together, 6.8% had a female householder with no husband present, and 21.4% were non-families. 19.1% of all households were made up of individuals and 7.5% had someone living alone who was 65 years of age or older. The average household size was 2.80 and the average family size was 3.23. 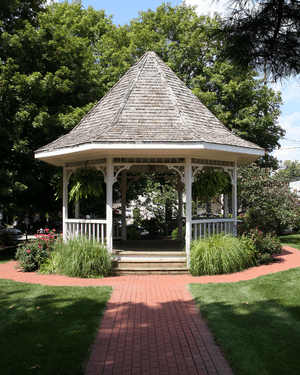 Gazebo at the site of the town's first railroad depot. Located in Lincoln Park.

Several blocks of Main Street in Zionsville have been intentionally groomed to give off a "village" air, specifically to attract shopping from nearby larger communities. In addition, Main Street has been paved entirely in brick and the street lamps and other features (such as a lower speed limit) are maintained to encourage visitors and residents to spend a good deal of time shopping on foot along the length of the street.

One of Zionsville's seasonal attractions, the July Fourth fireworks show hosted by the local Lion's Club, brings in people from across Indiana. Unlike many of the Independence Day celebrations in major cities, the Zionsville fireworks show has no music integrated into the performance, although there are concerts before the display. There is also the Fall Festival which has a parade featuring sports teams, organizations from Zionsville and surrounding communities, and the Middle and High School marching bands. There is also a festival at the Lion's Park with attractions like rides, games, and food. It lasts for one weekend in September.

Zionsville contains the Goldman Union Camp Institute (or GUCI), a Jewish camp that is part of the URJ (Union for Reform Judaism).

All content from Kiddle encyclopedia articles (including the article images and facts) can be freely used under Attribution-ShareAlike license, unless stated otherwise. Cite this article:
Zionsville, Indiana Facts for Kids. Kiddle Encyclopedia.