Zizina labradus, the common grass blue, grass blue, or clover blue, is a small Australian butterfly of the family Lycaenidae. 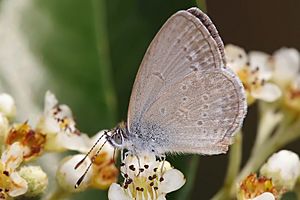 Adults are purplish blue on the upper wing surface with a black body and black or brown wing margins. These margins are larger on the female than the male. The lower wing surface is brown to pale brownish grey with a pattern of fawn bands and spots, with the body covered in white or grey hairs. The wingspans of females are slightly larger than males, females having a wingspan of 23 mm and males 20 mm. Common grass blues have a weak, fluttering flight and so usually fly near ground level close to a food source.

Eggs are white or pale blue and have a mandarin shape with a pitted surface. Caterpillars reach about 7 mm in length, and their appearance is primarily green with a yellow stripe at the sides and a darker green stripe on the back, and brown or black head usually obscured under the thorax. In captivity, fed on an artificial diet, larvae come in highly variable colours, ranging from white through red to dark purple. Pupa are 10 mm long with erect hairs. Colouration varies, ranging from pink, greyish or greenish cream and contains mottled dark spots.

Zizina labradus labradus, as its name suggests, is very common and can be found in suburban gardens, particularly perching in grass; lawns and fields.

Single eggs are laid which can hatch in a matter of days. The eggs are laid on leaves, stems, flower buds and young pods of food plants, chiefly legumes of the family Fabaceae such as beans, clover, and various native species. Newly hatched larvae eat small holes from young leaves or flower buds, and later feed mainly inside flowers. The larvae are considered a minor pest and will feed on leguminous plants such as garden beans by eating a small hole into the pods and then devouring the soft seeds within. In captivity when food is scarce the larger larvae will cannibalize smaller ones.

The larvae are typically attended by ants of the genera Paratrechina, Rhytidoponera, and Tapinoma.

All content from Kiddle encyclopedia articles (including the article images and facts) can be freely used under Attribution-ShareAlike license, unless stated otherwise. Cite this article:
Zizina labradus Facts for Kids. Kiddle Encyclopedia.