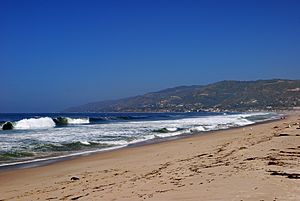 Zuma Beach is a county beach located at 30000 Pacific Coast Highway (PCH) in Malibu, California. One of the largest and most popular beaches in Los Angeles County, California, Zuma is known for its long, wide sands and excellent surf. It consistently ranks among the healthiest beaches for clean water conditions in Los Angeles County. The origin of the name of the beach may be related to the origin of the name of nearby [promontory] Point Dume. Point Dume was named by George Vancouver in 1793 in honor of Padre Francisco Dumetz of Mission San Buenaventura. The name was misspelled on Vancouver's map as "Dume" and was never corrected. On a plat map of the Rancho Topanga Malibu Sequit finally confirmed to new owner Matthew Keller in August 1870, the point is marked on the map as "Point Zuma or Duma". 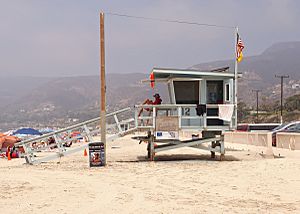 Zuma is protected by the Lifeguard unit of the Los Angeles County Fire Department, with 14 lifeguard towers on the sands proper and one of four L.A. County Section Headquarters located at the center of the beach. Like all beaches with good surf, Zuma has its share of rip currents. Visitors are encouraged not to swim or surf in front of the Lifeguard Headquarters between Towers 8 and 9, an area particularly prone to rip currents. In fact, rip currents are so prevalent that as of 2007 the Los Angeles County Fire Department Lifeguard Unit uses Zuma Beach to illustrate a rip current.

On its southeast side, Zuma is bordered by Westward Beach. Westward is geographically situated on Malibu's westernmost promontory known as Point Dume. Westward includes a stretch of 2-way road right at the sand's edge. Parking is available on the road as well as a fee parking lot. Westward Beach is marked by a shorter sand shelf than Zuma, a veritable pipeline, making the waves of less duration and higher impact. Westward Beach is recommended only for strong swimmers, as the wave action compared to Zuma Beach is stronger, can push down on swimmers, and delivers more of a "crunch." Westward Beach is where former lifeguard Jesse Billauer suffered the accident that left him paralyzed.

With its proximity to the film and television industry in Los Angeles, Zuma Beach has been a popular location for advertisements in film and print, films, and television episodes, such as:

Zuma Beach is home to the annual Malibu Nautica Triathlon, a benefit for Children's Hospital of Los Angeles. The swim portion begins at Zuma Beach, followed by a bicycle segment along the length of Zuma Beach north to Deer Creek Canyon, capped by a run along the sidewalk fronting Zuma Beach. In its 34th year as of 2008, the Malibu Nautica draws competitors from around the world but is best known in popular culture for the Hollywood celebrities and retired Olympic medalists who compete. Stars in recent Nauticas have been David Duchovny, Felicity Huffman, Carl Lewis, Jennifer Lopez, William H. Macy, and Matthew McConaughey. Many television stars also have competed. In 2008, athletes participating in the Nautica raised nearly $980,000 for Children's Hospital.

All content from Kiddle encyclopedia articles (including the article images and facts) can be freely used under Attribution-ShareAlike license, unless stated otherwise. Cite this article:
Zuma Beach Facts for Kids. Kiddle Encyclopedia.