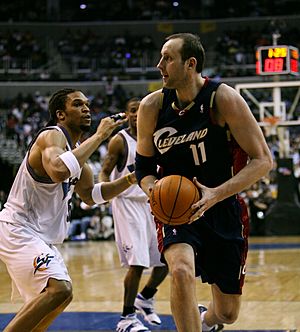 Žydrūnas Ilgauskas with the Cleveland Cavaliers

Žydrūnas Ilgauskas (born June 5, 1975 in Kaunas, Lithuania) is a retired Lithuanian basketball player who played 13 seasons in the NBA. He played 12 seasons with the for the Cleveland Cavaliers and 1 season with the Miami Heat. He retired from basketball in September 2011 to spend more time with his family.

All content from Kiddle encyclopedia articles (including the article images and facts) can be freely used under Attribution-ShareAlike license, unless stated otherwise. Cite this article:
Žydrūnas Ilgauskas Facts for Kids. Kiddle Encyclopedia.