1740 Broadway (formerly the MONY Building or Mutual of New York Building) is a 26-story building in Midtown Manhattan in New York City owned by EQ Office. Located on the east side of Broadway between West 55th and 56th Streets, it shares a trapezoid-shaped city block with the Park Central Hotel.

Signage on the facade

Its most famous attribute was once a sign at the top of its facade which advertised for Mutual of New York, the structure's original owner. The first version spelled out the entire name, with the first letter of each of the words in it (MONY) being red neon lighting which was twice the size of the rest. It was in this form that the sign served as both the inspiration for Tommy James and the Shondells' 1968 hit single "Mony Mony" and as a motif in Midnight Cowboy. The subsequent version was the corporate logo, which was the insurance company's acronym with a dollar sign inside the "O."

The MONY sign was removed by Vornado in December 2007, and replaced with "1740" to reflect its street address. The numerals, 8 1⁄2 feet (2.6 meters) tall and in Futura typeface, are illuminated at night by white light-emitting diodes.

Perched on the roof is the Weather Star, a 150-foot (46 m) tower of lights topped with a star which was built by Artkraft Strauss. The star was green if the following day's weather forecast was fair, orange for cloudy, flashing orange for rain and flashing white for snow. The direction the lights on the tower moved depended on whether the temperatures were expected to rise or fall; absence of movement meant no change. The Weather Star is still operable, but is no longer used for meteorological forecasting purposes. At the base of the tower is a four-sided electronic digital board that has always displayed the current time and temperature. 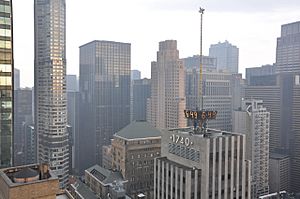 Daytime View of the 1740 Broadway Building from another Tower. The "Weather Star" can be seen on top.

All content from Kiddle encyclopedia articles (including the article images and facts) can be freely used under Attribution-ShareAlike license, unless stated otherwise. Cite this article:
1740 Broadway Facts for Kids. Kiddle Encyclopedia.