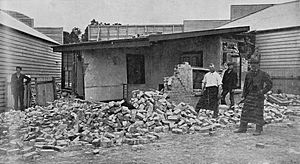 McTaggart's butcher shop in Cheviot after the earthquake

A baby was killed when a sod hut collapsed. Other casualties in the Canterbury region are not known.

The ChristChurch Cathedral experienced some damage in this earthquake. The top of the spire fell again as a result of the 16 November 1901 Cheviot earthquake. This time, the stone construction was replaced with a more resilient structure of Australian hardwood sheathed with weathered copper sheeting, with an internal mass damper.

Observations of sand blows (sand volcano) and lateral spreading, consistent with soil liquefaction phenomena in the township of Kaiapoi were reported in local newspapers in a two to three block area at the eastern end of Charles and Sewell Streets on the north bank of the Kaiapoi River, in addition to similar effects observed on the opposing river bank, and the road to Belfast.

All content from Kiddle encyclopedia articles (including the article images and facts) can be freely used under Attribution-ShareAlike license, unless stated otherwise. Cite this article:
1901 Cheviot earthquake Facts for Kids. Kiddle Encyclopedia.