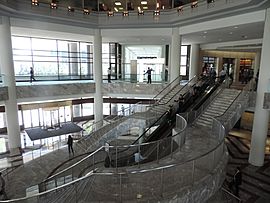 It is located at 200 Liberty Street between South End Avenue and West Street. It was built in 1985 as part of the World Financial Center complex. It is a 40-story building reaching the height of 577 feet (176 m). It has a leasable area of 1,628,000 square feet (151,200 m2). Similarly to other WFC buildings it has a unique roof which is a truncated square pyramid. It is connected to the rest of the complex by a skybridge over Liberty Street.

The building is located across the street from the World Trade Center site and was significantly damaged in the September 11 attacks. The initial dust cloud and other explosions shattered many windows, heavily damaging nearby Winter Garden Atrium and other buildings of the World Financial Center complex. It was closed for several months and reopened in 2002 after extensive restoration.

It was renamed 200 Liberty Street when the rest of the complex became Brookfield Place in 2014.

All content from Kiddle encyclopedia articles (including the article images and facts) can be freely used under Attribution-ShareAlike license, unless stated otherwise. Cite this article:
200 Liberty Street Facts for Kids. Kiddle Encyclopedia.